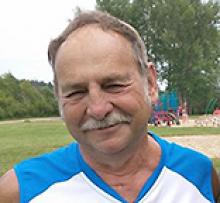 Peacefully and with family by his side, Cliff passed away on August 11, 2019 at the Health Sciences Centre after an almost three-year battle with Mesothelioma.
Cliff was born in Winnipeg, Manitoba on September 27, 1946 and lived his entire life in the Ashfield area.
He is survived by: his wife Alyce; daughters, Tara Hnatiuk (Brad Taplin) and Stacy (Corey) Stewart; stepchildren, Hans (Michely) Berger, Kurt (Sara) Berger and Stephanie (Kerry) O'Brien; grandchildren, Emery, Macalan, Isabella, Alyssia, Tobias, Michael and Brielle; as well as, his brother Allan (Wendy) Hnatiuk and sister-in-law Honey Kowall (Harry Reiss). He is also survived by his aunts, Irene Banash and Olga Hnatiuk, his nieces, nephews and cousins.
Cliff was predeceased by his parents, Samuel and Doris Hnatiuk; brother Harold Hnatiuk; brother-in-law Bert Gillman and his first wife Diane Hnatiuk.
Cliff began his trade as an electrician as a young man and worked for many electrical contractors as an apprentice, journeyman and trade electrician. From 1987 to 1990 he worked as a Maintenance Electrician in the Diesel Shop at CPR, then from 1990 to 2011 until his retirement he worked as an Electrician, Maintenance Supervisor and Acting Chief of Works at Stony Mountain Institution.
Nothing was more important to Cliff than family and he loved being surrounded by his grandchildren. He enjoyed curling and was a Past President of the Selkirk Curling Club, he and Alyce enjoyed golfing, camping and fishing especially up at Hecla Island. Cliff always looked forward to spending winters with a group of wonderful friends in Yuma, Arizona, and took the opportunity to explore other areas in Arizona, California and northern Mexico.
A prayer service will be held on Wednesday, August 14 at 7:00 p.m. at Gilbart Funeral Chapel, Selkirk. Funeral Mass will be held on Thursday, August 15 at 2:00 p.m. at Holy Trinity Ukrainian Catholic Church with Father Peter Chorney officiating. Interment will follow at the church cemetery.
Pallbearers will be Hans Berger, Kurt Berger, Brad Taplin, Corey Stewart, Kerry O'Brien and Tobias Berger.
The family would like to thank Doctors Friesen and Wheeler, the nurses and unit assistants at HSC GD5. So much caring, kindness and compassion was shown by these staff members to both Cliff and the family. We would also like to thank the wonderful staff at Selkirk CancerCare who guided Cliff through chemotherapy.
In lieu of flowers, a donation to CancerCare Manitoba would be sincerely appreciated.

Condolences may be left on his tribute wall
at www.gilbartfuneralhome.com