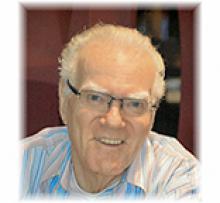 While surrounded by his loving family on Monday, August 12, 2019, at St Boniface Hospital, Gordon (Gord), at the age of 74, peacefully passed on.
Dad was predeceased by his father Charles; mother Christine; and his aunt Sadie. He leaves to mourn his wife Elsie of 53 years; his children, Merrilee (Wade) and Craig (Sara)), and his grandchildren Brooke (Brendan), Kirsten, Leif, Sylvie and future Grandbaby. He also leaves behind his sister Christine; and so, so many family and friends.
Dad was born in Edinburgh, Scotland, on March 10, 1945, immigrated to Winnipeg in December 1946 and spent many of his childhood summers on the family farms in Baldur, Manitoba.
He graduated from St. James Collegiate and began his career at Investors. Starting in the mailroom, he would then advance over the next 32 years to his final position as Assistant Manager with the Information Technology Department. There he would also meet the love of his life, Elsie.
Mom and Dad were married in October, 1966, with daughter Merrilee arriving in 1971 and son Craig in 1977. Many summer vacations were spent travelling across Canada in the famous green and white van connecting with family and friends.
Dad began his lifelong passion for volunteering with the Red River Exhibition at a very young age where he actively served for 24 years. Other notable agencies he volunteered with over the years were the Recycling Council of Manitoba, Red River Sport Collectors Association, Habitat for Humanity, Pan Am Games, the Canadian Brier and the PC Party which he was still an active member of along with many others ... too numerous to list.
While volunteering, he always found time to support us kids and our activities, whether it was driving us to practices and games or cheering from the sidelines. He was just as proud of his grandkids and was always excited to support and attend their activities as well.
Dad loved hitting the road for a drive, with his favorites being out to Neepawa and the farm in Sarto, Manitoba. Later, catering with Auntie Phyllis (Phyllis' Catering) became Dad's passion. He enjoyed socializing while preparing food in the summer kitchen, the drive on the highway to the event, meeting people at the event and especially the talk around the summer kitchen table after the event.
Dad touched so many people in all his endeavors. He loved to have a good time and make people laugh; he always had a story and a joke for everyone.
Funeral services and lunch will be held at St. Anne's Ukrainian Catholic Church, 35 Marcie Street, Monday, August 19, at 11:00 a.m. with Rev. Fr. Mark Gnutel officiating. Interment to follow at Glen Lawn Cemetery, 455 Lagimodiere Blvd.
The family would like to thank the Winnipeg Fire & Paramedic Service, the doctors and nursing staff at St. Boniface Hospital emergency and ICU departments.
In lieu of flowers, donations can be made in Dad's honor to Diabetes Canada.
Publish Date: Aug 17, 2019


Surrounded by his family, Gordon passed away peacefully on August 12, 2019.
Funeral services will be held on Monday, August 19, 2019 at 11:00 a.m.
A longer obituary will follow in the Winnipeg Free Press on Saturday.