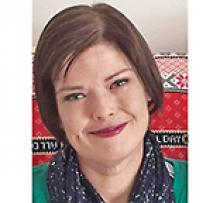 
On Sunday, August 4, 2019, our beautiful daughter Bronwyn Lawton left us to go to a place with no pain. She came into our lives 36 years ago, as we welcomed her with great joy and love on August 11, 1983.
Bronwyn will be lovingly remembered by her parents, Russell and Donna, brother Alex, many aunts, uncles and cousins. She will also be missed by her special friends, Ashlee, Nora and Jacks, along with all those who got to know her over the years, many co-workers and friends. She was predeceased by her grandparents, June and Ken Blair and Al and Bernice Lawton.
She grew up in Portage la Prairie and attended French Emersion graduating at PCI. At the age of 14 she became interested in provincial politics and joined the Young Liberal Association where she held many positions including president. Bronwyn was proud of her time with this organization, and more recently with the Scleroderma Association of Manitoba and Canada. At the age of 18 she believed Portage City Council needed a youth voice and ran for city council. As a young adult she continued playing a role in the Provincial and Federal Liberal Party until she became too ill. She studied at the University of Manitoba with an interest in 20th century history. Bronwyn had the interest early in her life as her favourite summer job was working at Fort La Reine Museum. She loved debating with others about politics and history.
She was an adventurous, kind and generous young woman, who loved spending time with her family. Bronwyn had a group of special friends who she enjoyed hanging out with and going to movies. She was a self-professed foodie who liked to dine out with family and friends. Bronwyn loved live theatre and attended many performances at MTC and the Fringe.
Bronwyn lived life to the fullest and even though the last few years brought challenges; she was able to travel to Disney World, Niagara Falls, Niagara on the Lake and most recently to her cousins wedding in Kenora. The memories from these trips will be treasured by her family forever.
There will be a come and go celebration of Bronwyn's life at her home on Sunday, August 25, 2019 from 2:00 p.m. to 4:00 p.m., 611 Avila Ave., Winnipeg, MB; those attending are asked to wear bright, casual attire. A private family interment will take place at a later date in the Macdonald Cemetery.
The family would like to thank all the doctors, nurses and staff from Health Sciences Centre, St. Boniface Hospital and the Palliative Care Program for the care and compassion over the past few years.
As expressions of sympathy, if friends so wish, donations may be made in Bronwyn's memory to Scleroderma Manitoba, 22 Silverdale Crescent, Winnipeg, MB R2N 1B1.

A tree will be planted in memory and cared
for by McKenzies Portage Funeral Chapel.
204-857-4021
www.mckenziesportagefuneralchapel.com