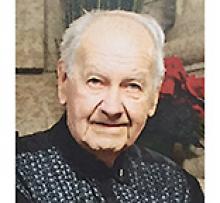 
It is with great sadness that I announce the sudden passing of my father, Ed Kubara, on Friday, June 14, 2019, at the Grace Hospital, at the age of 85 years following a lengthy battle with heart disease.
Dad was born in Winnipeg. He was the youngest of the family and the last survivor of his generation. Ed is survived by his only daughter Elaine; and several nephews and nieces. He was predeceased by his parents, Michael and Anna Rose (nee Papirniak) Kubara; his wife Jennie (nee Kaleka); brothers, William, John and Michael; sisters, Helen Dobrinsky, Olga Andronick and Emillia Rose; nephews, Larry Dobrinsky and Wayne Kubara; and niece Judy Szun.
Dad was educated in Winnipeg and helped during his early years with our grandfather after most of his siblings married and left home. He worked as a bell boy at the Royal Alex where he enjoyed telling of numerous adventures there including receiving a handsome tip from Bob Hope. Dad also worked assorted jobs including Perth's until his love of airplanes led him to Bristol Aerospace. He worked there for several years until he left with Noel Jeanson for a chance with Midwest which led to Transair and PW where he worked as a sheet metal worker. Dad was transferred to Calgary, Alberta in 1983 and worked until early retirement in 1986 when we all returned to Winnipeg. He quickly found employment with Air Canada until his final retirement. For many years, Dad was a volunteer with the Royal Aviation Museum of Western Canada where he quickly found his airplane family.
In accordance with Dad's wishes, cremation has taken place and a graveside service will be held at Holy Family Cemetery, 4355 Main Street, West St. Paul, MB on Monday, August 19, 2019 at 11:00 a.m. with Father Zachary Shwaluk officiating.
I wish to thank Dr. J. Barwinsky and family for giving Dad 20 extra years of life after his quadruple heart bypass in 1998. Also, to niece Linda and Bruce West for their love and care for Dad during our Calgary years, especially when they welcomed Dad into their home before Mom joined him in Calgary. I would also like to thank nephew Don Kubara for those many emergency trips to various hospitals; niece and cousin Cathy Costello for her tremendous support to me facing the loss of my dad; to Isabelle Coughlin for her help with Aunt Emily's passing; and many thanks to Bob Chapman for his amazing generosity and positive spirit helping Dad and me, and for all those trips to the emergency room.
Flowers are graciously declined.