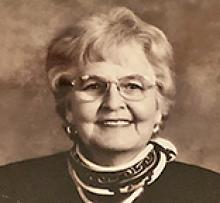 It is with great sadness and heavy hearts that we mourn the passing of our beloved Mother, Lorna Maxine Schroeder (Rintoul), who was born on September 13, 1930 and passed away peacefully on Saturday, August 10, 2019 at Lions Prairie Manor in Portage la Prairie.
Maxine was born and raised in Rossendale, MB, married the love of her life Helmut in 1951, and together raised their own family down the road from where she grew up.
She is deeply missed by her husband and children, Larry (Leona), Kathy (Keith), Gaylene (Richard), Penny (Dean) and Bonnie, and will always be remembered as the fun, adored and loving Grandmother of Haley, Tyler, Toshio, Kiyoko, Cole, Dylan, MacKenzie, Jillian, Kolby and Klay, and 11 great-grandchildren.
In her late teens, Maxine lived in Portage la Prairie where she worked at Narvey's clothing store, bowled in a league, played baseball with the Olympians, and loved to go dancing. The love of bowling, baseball and dance continued throughout her life with Helmut. They shared the joys and challenges of farm life where through the years they cultivated over 720 acres, raised cattle, pigs, horses, chickens, sheep, and five very active children.
Having been raised during The Depression, and one of 12 children, Maxine learned the value of hard work. In married life she was the first one up in the morning, getting everyone prepared and fed for the day. Then she ran from the kitchen, to the field, to the ironing board, to the pasture, to the garden, and back to the kitchen, where after everyone was heading to bed she would start blanching the vegetables picked that day, or canning pickles. She was never one to sit idle. Even at the end of the day, if the TV was on, she had some project in her hands.
When the grandchildren came along, Maxine was actively involved in what they were doing, and was always teaching by example. Like she did with her own kids, she would take them to the garden and show them how to plant, what was a weed, how to pick and also how to make those pickles. She patiently taught those interested, how to crochet or knit, tend to her loved flowers, and she never said "No" to a tea party, a game of tag or having her hair and makeup done. Maxine and Helmut loved to go watch and cheer on their grandkids in all their sports.
Maxine was a valued community member actively involved in the Rossendale United Church, Rebekah Lodge #3, and she was always there to lend a helping hand to her neighbours or at any community event. Above all, Maxine learned from her mother how to live life from the heart. "Kind", Compassionate" and "Forgiving" were three words often used to describe her. She entered every room with a smile, and lifted the spirit of those she met along the way.
Just days prior to her passing, Maxine and Helmut shared one last dance in their kitchen, as they so often did throughout their life.
The family would like to express their gratitude for the care and attention Maxine received, especially from her sister Vivian, friends, companion Anita, and the staff of Lions Prairie Manor.
A celebration of Maxine's life will be held at 2:00 p.m. on Friday, August 23, 2019, at Trinity United Church, 15 Tupper Street S., Portage la Prairie, MB.
Following the celebration and reception, a private interment will be held with family at the Rossendale cemetery.

Condolences may be left at our website:
www.ronaldmoffitmemorialservices.com/
obituaries.