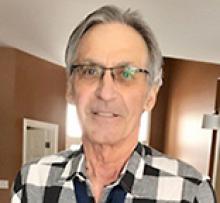 Surrounded by his family, Barry peacefully passed away on August 13, 2019, at the age of 71 years, after a courageous battle with cancer.
Barry leaves to mourn his wife of 50 years, Helen (nee Kork), their children, Corrina Stroh-Sys and Jennifer Sanclemente (Gerry), granddaughter Kaylee, sisters, Rachelle, (Ken) and Tracey (Wayne), brother Wayne (Barbara), as well as numerous cousins, nieces, nephews and many friends.
He was predeceased by his mother Matilda (nee Kasprick), father Anthony and brother Randy.
Barry was born on June 19, 1948 and raised in Winnipeg. He met his true love Helen and they were married in 1969. He worked at the Winnipeg Free Press for over 30 years until his retirement in 2008.
He was a crafty dad, teaching his kids and grandchild how to ride bikes and snowmobiles. An avid outdoorsman, his early years were spent at the lake in Lac du Bonnet fishing, canoeing, camping and waterskiing and in the last few years helping his daughter and son-in-law build their dream house. Barry was also very involved with local snowmobile club, Springfield Pathfinders, and spent many hours grooming trails for others to enjoy. His hobbies included curling and tinkering with sleds and loved going for Sunday cruises in his 1988 Camaro.
A celebration of Barry's life will be held at a later date. For more information, please visit Seasons Funeral Chapel.
In lieu of flowers, donations can be made to CancerCare Manitoba.