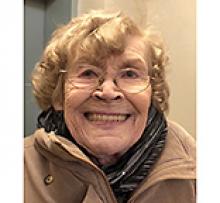 Jesse's family is grateful for all the kind gestures of condolence.
The family is holding a celebration of Jesse's life on Saturday, September 7 at 11:00 a.m. in the Tamarack Room of the Qualico Family Centre in Assiniboine Park, Winnipeg.
The site is near the Duck Pond (and ample parking) at 330 Assiniboine Park Drive.


Jesse Toews, aged 86, formerly of Steinbach, MB, passed away peacefully at the Grace Hospital in Winnipeg on August 10, 2019.
The eighth of 10 children, Justina "Jesse" Harder was born on the family farm near Plum Coulee to parents, Marie (nee Penner) and Diedrich Harder. When Jesse was nine years old, her family moved to a small homestead on Mackenzie Road in Steinbach.
Jesse married Norman "Chuck" Toews in 1954. Always a quick study, she fulfilled her role as mother and was also instrumental in the family businesses, Steinbach Bakery and Grow Sir.
She was the last surviving sibling in her family. Predeceased by Norman in 1994, Jesse is survived by their three children: Mitchell (Janice, nee Kasper) of Jessica Lake, MB, Charlynn Toews (David Menzies) of Terrace, BC, Marnie Fardoe (Ken Fardoe) of Winnipeg, and five grandchildren: Megan Olynyk (Blair Olynyk) and their children, Tyrus and Hazel, Tere Toews (Tom Halpin), Cameron Menzies, Emily Fardoe and Maris Fardoe.
A celebration of Jesse's life is being planned for September, details to be announced. For information on the event and also to share pictures and memories, please visit this commemorative web page: http://bit.ly/justinaJESSEtoews
Publish Date: Aug 17, 2019