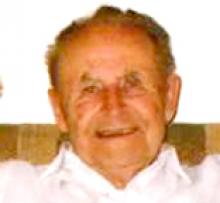 It is with deep regret and sadness we announce the passing of George Felix Webb on Friday, August 16, 2019, at the age of 94, while undergoing treatment for Pseudomonas Pneumonia.
George was predeceased by his loving wife of 64 years, Marjorie Patricia "Pat"; his parents, Orlando and Lydia; brothers, Tom and Jim; and sister Lydia. Left to mourn his passing are his daughters, Linda (Ted) Firman, and Lois (Charlie) Marshall; son Bob (Marie); brothers, Tom and Sam; grandchildren, Tammie (Gene) Wuensche, David Firman (Anna Maria Gallos), Jasmine Firman, John Halbauer (Jen Rowlette), Amanda Halbauer (Chris Safranka), Ron (Meghan) Webb, Cody (Sharon) Webb; great-grandchildren, Katherine, Braden, Emma, Declan, Kendra, Keaton; and great-great-grandchildren, Keeghan, Lukas and Sawyer. Also left to mourn his passing are stepgrandchildren, Angie, Curtis, Dustan, Shannon, Cherrice, Leigh, Taylor and Scott; as well as numerous stepgreat-grandchildren, nieces and nephews, in-laws and friends.
Dad was born on November 16, 1924 in Mylor, England and immigrated to Canada in 1925 at the age of six months old with his parents and two older brothers to settle on a farm in Franklin, MB where his other siblings were born. Dad often spoke of growing up on the farm, attending a one-room schoolhouse for all grades until high school and adventures he had with his brothers on the farm. Some of his childhood duties included counting all the root vegetables they grew for winter storage for the family, as well as starting the wood stove to heat the rural schoolhouse in the winter for a wage of 10 cents per month.
At the age of 17 Dad enlisted in the army and fought valiantly in the Second World War. After the war he returned home, worked building bridges and then started working for McLeod's Hardware. During that time, he met our mother and they were married on March 4, 1950. Dad was very proud of his achievements at McLeod's during his 30 years of employment where his advancement in the company resulted in several moves for the family until moving to Winnipeg in 1967.
Dad loved his family, enjoyed family gatherings and was so proud that there were five generations in his family. He really enjoyed the times that he and Mum spent at their cottage in Albert Beach and wintering in Texas. Dad enjoyed hunting, fishing and curling and in later years, playing cribbage. He never backed down from new experiences, such as tubing and driving an ATV and a Sea-Doo, even though he was in his nineties.
Dad was such a kind, fair, generous supportive person and will be so greatly missed by his family and everyone who was fortunate to know him.
The family wishes to give thanks to the home care nurses and neighbours during his illness, especially Donna Smith.
For those who wish to do so, donations can be made to the Manitoba Lung Association, 301-1 Wesley Avenue, Winnipeg, MB R3C 4C6, in lieu of flowers.
A family service will be held in Brandon, MB.

"We love you Dad and will miss you always."


On Friday, August 16, 2019 George passed away at his residence at the age of 94 years.
A longer obituary notice will follow.