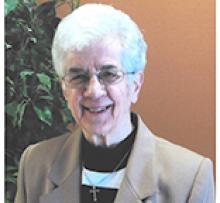 
Surrounded by the love of her Grey Nuns companions and her loving niece, Agnès Rémillard, Sr. Lucille Damphousse passed away on August 16, 2019 at the age of 87.
She was predeceased by her parents, Marie-Louise Jubinville and Albert Damphousse, as well as her brother Paul. She leaves to mourn her religious community, her brother priest, Georges Damphousse, her three sisters, Françoise Vermette (Gérard), Thérèse Rémillard (Ambroise) and Céline Dansereau (Cecil), a sister-in-law, Fernande Damphousse, her devoted niece, Agnès Rémillard, who spent hours by her bedside during her illness, and many nieces, nephews, friends and collaborators in the health field.
Born December 8, 1931, in St. Joseph, Manitoba to Albert Damphousse and Marie-Louise Jubinville, Sr. Lucille attended school in St. Joseph, Manitoba and completed her high school in St. Norbert, Manitoba, where she met the Grey Nuns and decided to join the order in 1953. As a young sister, she was invited to pursue her studies in Health Care and became a registered nurse from St. Boniface Hospital and later acquired a bachelor's degree in nursing from l'Institut Marguerite d'Youville in Montreal.
For the next few years she worked as a supervisor in the Grey Nuns' Hospitals, in Regina, St. Boniface and St. Rose du Lac. At the request of her superiors, she later obtained a certificate in Hospital Management and served as Executive Director of the Youville Foundation, St. Rose Hospital and Foyer St. Boniface. During her tenure as Executive Director of Foyer St. Boniface, she oversaw the construction of a new long term facility and the transfer of the 70 residents to their new home, Foyer Valade.
In her 65 years of religious life, Sr. Lucille served with integrity and diligence at various levels of leadership in the congregation, in Manitoba, Alberta and Quebec.
She has touched the lives of many people by her great simplicity, her love of the Congregation, her faithfulness to serve the poor, and her constant and ongoing support to lay collaborators called to minister in our various works of charity.
The Grey Nuns and the family wish to thank the nursing staff at Despins Residence and at Actionmarguerite for the compassionate care given to Sr. Lucille during her illness, especially Isabelle Marion, RN, her caring niece, Agnes Rémillard, Lise Myskiw, and all those who journeyed with Sr. Lucille in the last few months of her life.
Avant de nous quitter, Sr Lucille avait laissé ce petit mot: "Aux compagnes, soeurs Grises, membres de ma famille (frère, soeurs, neveux, nièces), résident(es) et personnel de la Résidence Despins qui m'ont accompagnée au jour le jour, au cour des derniers mois, je veux exprimer mes sentiments les plus sincères de reconnaissance pour vos prières, offrandes, gestes d'amitié, de présence, visites et autres, durant ma maladie."
The funeral mass for Sr. Lucille Damphousse will be celebrated by Father Arthur Massé, o.m.i. and Fr. Georges Damphousse as co-celebrant at 151 Despins Street, Winnipeg, on August 21, 2019 at 1:30 p.m., preceded by viewing at 1:00 p.m. Interment will follow in the St. Boniface Cemetery on Archibald Street.

Family and friends may sign a
book of condolence at www.desjardinsfuneralchapel.ca