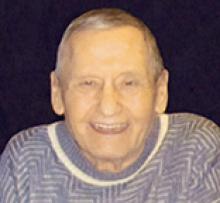 
On August 15, 2019 Joe passed away peacefully, at the age of 76, at the Victoria Hospital.
Joe was born and lived in Winnipeg all his life. He worked in various printing jobs. Joe leaves behind to mourn his common law wife / partner / friend of 19 1/4 years, Judy Mucha.
He is survived by his sister Shirley (Dennis) Hurt and their families; and brother-in-law Terry Jackson and his family. He is also survived by his children: his daughters, Cathy (Jim) Scharf and granddaughters, Stephanie and Laura; Debbie Choate and grandsons, Kevin and Ian; and Joe's son Michael. He has also left behind Judy's daughter Shellie; and her son Brenden (Goodbye Sleepy Joe); and many uncles, aunts, cousins and friends, including Judy's side of the family.
Predeceased by his father Nicholas; mother Veronique; brother Wayne; and sister Darlene; many aunts, cousins and friends, too numerous to mention.
Joe was a member of the Rockwood #303 A.N.A.F. for 18 years. He enjoyed golfing, darts, fishing, shuffleboard and dancing to the bands until his illness took over.
Special thanks to the WFPS for the numerous times they attended to Joe. Also to the doctors and nurses at the Victoria Hospital (ER and Urgent Care) and 5th floor South for excellent care they gave to Joe during all his stays.
Celebration of Life will be held on Wednesday, August 21, 2019 at 10:00 a.m. at Thomson "In the Park" Funeral Home, 1291 McGillivray Boulevard.
In lieu of flowers, donations may be made to Manitoba Liver Foundation or Alcoholics Anonymous.