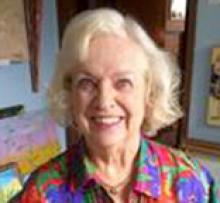 June passed away peacefully with her three daughters by her side singing hymns at Selkirk Betel Care Home on Monday, August 19, 2019. June was born on June 13, 1934 in Hnausa, MB.
Leaving to cherish her memory, Valerie (Elerd), Kyle (Rachel), Zion, Lyrik, Lex, and son Kurtis, Debbie (deceased May 13, 1992), her spouse Randy Sackney their children, Kristjan (Tamara), Daniel, Louise (Pierre), their children, Jenny (Keith), Finley, Theo, son Jordan, Madison, Brody, son Jeremy (Tamara), Sloane, Ellis, daughter Lorene, Tanya (Darryl), Nicholas, Naomi, daughter Amber, Sarah (Tim). Also left to mourn is Leonard (Dorothy) Martin. June was predeceased by her husband Zeke, daughter Debbie as well as her parents, Gudrun, Gunnlauger and her brothers, Don and Brian Martin.
Mom and Dad were married for 61 years before Dad's passing in 2014. Mom was an active member of Kinettes and served as a President. She was also a founding member of the Gimli Art Club. June was a strong and passionate woman full of creativity and faith. She had an amazing life and endured a lot including the loss of a child. Most recently she had to endure living in a facility that was not her home while losing most of her basic human abilities. Through the last few months, she continued to smile and sing, even when it seemed that she didn't know who some of us were or what was going on all the time.
Mom was greatly loved and will be dearly missed by all of us; her memories will live in our hearts. Goda Nott Saetur Dreyma.
Her funeral service will take place on Saturday, August 24, 2019 at 3:00 p.m. with Pastor Tom Clewlow officiating at the Lighthouse Church, 12 Solvin Road, Gimli, MB. Her pallbearers will be her grandsons: Kyle Eyolfson, Kurtis Eyolfson, Kristjan Sackney, Daniel Sackney, Jordan Prest and Jeremy Prest.