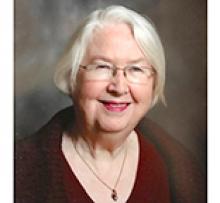 
With deep regret, after a lengthy illness, we announce the passing of Frances-Mary Brown (nee Orchard) on Sunday, August 18, 2019 at West Park Manor in Winnipeg, MB at the age of 83 years.
Frances-Mary was born in Neepawa, MB on January 10, 1936. Her childhood was spent in between Neepawa and St. James, MB. In 1955, she married James E. Brown (predeceased 2007) from Basswood, MB and settled in Winnipeg, MB. They raised three children.
Her career as a teacher started out in a one-room schoolhouse and ended with the Winnipeg School Division teaching English as a Second Language (ESL). Frances-Mary taught for over 30 years. She wrote several fantasy books in her retirement and thoroughly enjoyed meeting with her writing group. She travelled to many destinations including Europe, China, and all-over North America.
Frances-Mary will be missed by many but especially her immediate family, eldest son James D. Brown, his wife Patricia, and sons, James and Paul; second eldest son Flynn C. Brown, his wife Norma, his daughter Lauren (her husband Michael), and his son Andrew; youngest and only daughter Arden A. Brown and her daughters, Robin and Gabrielle.
On Thursday, August 29, 2019, Frances-Mary's funeral service will be held at 1:00 p.m. at St. Andrews Woodhaven Anglican Church, 2700 Portage Avenue, Winnipeg, MB R3J 0R1 with Rev. James Kirkpatrick, presider. Interment will be at a later date in Basswood, MB for immediate family members.
In lieu of flowers, please donate to an animal shelter or your choice.