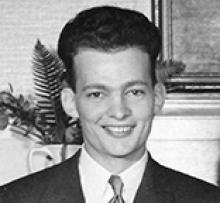 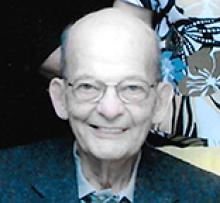 
Bill's children and grandchildren mourn his passing at his home in Oakview Place on August 19, 2019. He was predeceased by his wife Barbara (March 2017) and his daughter Catherine (March 2015).
Seven children remain to cherish our father's memory, David, Connie (Robert Hill), Joan (David Sneddon), Kim (Howard Wood), Geoff (Monica), Colin (Yvonne) and Margaret (Bill Irwin). Thirteen grandchildren honour Bill's life and memory. Thirteen great-grandchildren are a part of his legacy. Born and raised in Winnipeg, Bill is also survived by his sister Margaret Downie, her four sons and their families.
Bill was a veteran of the Second World War, serving as a navigator with the R.C.A.F. (435 Squadron) in the Pacific theatre. Returning to civilian life, Bill joined the food brokerage firm of Watson & Truesdale, eventually making the company his own - W.A Kyle Sales. He married Barbara in April 1947, and the couple enjoyed nearly 70 years of married life.
Bill worked hard to build his business and support his growing family. We tend to think of Dad as the worker and Mom as his fun-loving social director, but this is only partly true. Both parents had rich social lives and many friends. They met at the Canoe Club and became part of the Hike and Hoppers, a group that continued to meet into their retirement years. They were active in their community and their church. They were friends to their neighbours.
Dad bought the cottage at Falcon Lake in the early 1960s and this became his ongoing labour of love, spending his weekends maintaining and expanding the cottage. When boys had the temerity to follow his daughters out to the lake he let them pitch their tents in the backyard and then put them to work. He gave them shovels to dig yet another hole for another backhouse. He got them to crawl under the cottage to test the electrical circuit and jump in the cold water to take the dock out for winter storage.
His future sons-in-law named him "The Bear," and over time he came to embrace his name. He welcomed all the in-laws and later all the grandchildren. He was protective of his family. He was a devoted husband and father. He taught his children to work hard, take responsibility for their actions, to trust in the goodness of the world, and to behave with integrity and generosity towards others. He led by example.
At the age of 80, while golfing with his sons and son-in-law on Father's Day, he hit a hole-in-one. Sometimes, you're just lucky. We were lucky to be Bill's children.
The family would like to thank all of the staff at Oakview Place for their kindness and the care and compassion they showed Bill during his time with them. You are all truly special people.
The family will hold a private gathering to honour Bill's life and memory at a later date.