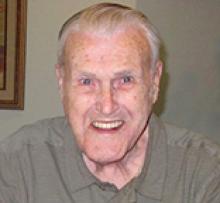 It is with sadness that we, his family, announce the passing of Gordon Quinn on August 19, 2019, at age 93.
Left to cherish his memory are his children, Diane (Paul) and Don (Charlene); daughter-in-law Susan; grandchildren, Brenda (Andrew), Adam (Carla), Jay (Cheyanne), Samantha (Adam), Nicole (Jordan) and John; great-grandchildren, Ava, Kaitlin, Ethan, Alyssa and Carter; and his sister Edith. Many other family members and friends will remember him fondly.
Gord was predeceased by his wife of 67 years, Doris (who passed away in January of this year); parents, Robert and Margaret Quinn, his brother Bob, as well as his son Gord.
Dad was born in Winnipeg on February 7, 1926. He lived in the Fort Rouge area for most of his married life. He and Doris attended and supported St. Alban's Anglican Church where many of our family's weddings and baptisms were held. Gord worked as a custodian for the Winnipeg School Division. He proudly belonged to the Order of the Eastern Star, to the Shriner's and to the Masonic Temple.
Gord loved keeping in touch with all the family news and participating in all of our celebrations, birthday parties and get-togethers. He and Mom had both resided at Tuxedo Villa. Thank you to the staff for taking good care of Dad in his final months.
No formal funeral will take place. A private family interment will follow at a later date. Gord and Doris will be interred at the same time - together again in eternity.