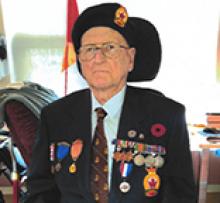 
Bill passed away peacefully in his sleep on August 16, 2019 in the Grace Hospital at the age of 96.
Bill was born March 22, 1923 on the homestead in Crane River, MB to William and Alice (Cluff) Robbins.
He was predeceased by his first wife Esther, of 59 years in 2002. He is lovingly remembered by his wife Caroline; son Ed (Elsie) Robbins of Sandy Hook, MB; daughter Diane (Metro) Chudobiak of Headingley, MB; grandchildren, Tina (Kelly) Antonyshen of Elm Creek and Candace (Derek) Kozak of Winnipeg; great-grandchildren, Jesse (Caity) Antonyshen of Winnipeg and Harley Antonyshen of Elm Creek, MB; brothers George (Nora) of Waterloo, ON, Samual (Beryl) of Winnipeg, MB and David of Winnipeg, MB; many nieces and nephews; and his stepchildren and stepgrandchildren.
Bill moved with his family from Crane River to Freedale in 1928. In 1937 Bill moved to Rorketon to live with his grandparents. In 1939 he joined the Princess Pats and went overseas and took part in the invasion of Dunkirk, fought in Sicily, and Italy where he was wounded and ended up back in Sicily for six months convalescent. He returned briefly to England where he met and married his first wife Esther King July 31, 1943. He was then shipped back to the front line where he was an instructor for the Fifth Division in Holland. In 1945 he returned to England where he spent the remainder of his service processing SS troupes. Bill returned to Rorketon in 1945 after the war, and Esther followed in 1946 as a war bride.
In Rorketon he operated a trucking business until 1960 then went into a road construction business until his son took over in the 1960s. Bill was an avid private pilot, owning his own planes and establishing the only registered landing strip in the area. He was a member of the International Flying Farmers. He was a member of the Rorketon Canadian Legion Branch 87 since 1946.
In 1970 Bill and Esther moved to Dauphin and built their new home. He worked as a mechanic for the Town of Dauphin for several years until he retired. He became interested in Amateur Radio and got his Ham license with the call VE4WM.
In 1986 Bill and Esther started what became an annual trip to the southern U.S. for the winter months, where they wintered in several different locations until finally settling in Yuma, Arizona.
After the passing of his first wife Esther, Bill married Caroline Kostick of Roblin, MB in January 15, 2004. They continued the lifestyle of wintering in Arizona and spending the summer in Roblin. Bill loved the area as one of his passions was fishing at Lake Asessippi.
As his health diminished he moved into Deer Lodge Centre in Winnipeg with his wife Caroline, where he spent his final days living close to family.
The family would like to thank the staff at Deer Lodge Centre for their care throughout his stay and the staff at Grace Hospital for their care in his final week.
A celebration of Bill's life will be held at Deer Lodge Centre on Friday, September 27, 2019 at 11:00 a.m. Interment has taken place at Ridgeway Cemetery in Rorketon.
In lieu of flowers, a donation may be made in Bill's memory to a charity of your choice.