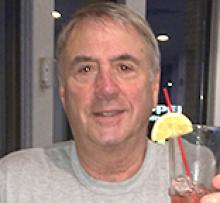 "He never met a stranger."

Our hearts are broken to announce that Maurice Mazerolle passed away August 14, 2019, on his own terms, following a six year battle with pancreatic cancer.
Maurice is survived by his wife of 54 years, Bonnie (Kessler); son Drew (Jane Carson), Kristian and Jasmyn; daughter Danielle, Lilli and Mia; sister Carmel Neighbour; and in-laws, Alan (deceased 2019) and Shirley Kessler, Chuck and Dianne Biggs, Hugh Kessler, Maxine Kessler and their families. He was known as "Uncle Moe" to his nieces and nephews and their friends.
Maurice was predeceased by his parents, Leo and Theresa Mazerolle.
Maurice was born in Campbellton, New Brunswick and embraced his Acadian heritage, making many visits keeping connected to his family there.
His family moved to Manitoba when he was two years old settling in St. Lazare, then moving to Minnedosa when he was 12. His family owned and operated Leo's Bakery in Minnedosa.
Maurice and Bonnie met in Minnedosa and were married in Winnipeg, July 3, 1965.
He attended Brandon University, graduating in 1974 with a degree in science which set the stage for his future career. Maurice worked an Environment Officer with the province of Manitoba and was devoted to his job and colleagues. Although he retired in 2003, he continued as a consultant until July 2019.
He was well known for his booming voice and his "joie de vivre".
He was an athlete, an organizer and a leader, serving as science stick in university and participating in the community and various organizations.
Maurice and Bonnie travelled to many parts of the world and even after his diagnosis continued to travel closer to home.
Maurice was a devoted husband, father, and Papa.
He faced his illness with courage and never complained about the tests and treatments he had to endure.
We would like to thank CancerCare Manitoba, Cross Cancer Institute, and our friends and family who walked this path with us. A special thank you to Dr. Patrick Lawrence who has been our guardian angel.
A Celebration of Life will be held from 3:00 p.m. to 5:00 p.m on September 15, 2019 at the Irish Association of Manitoba, located at 654 Erin Street, Winnipeg, Manitoba.
In lieu of flowers, donations will be gratefully accepted to Siloam Mission, 300 Princess Street, Winnipeg, MB R3B 1M3, CancerCare Manitoba, or a charity of your choice.