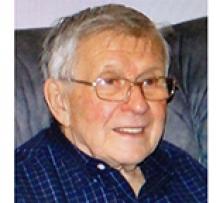 On August 13, 2019, Alex passed away peacefully at the Grace Hospital, at the age of 91.
He will be remembered by Rose, his wife of 64 years, his son Lawrence (Susan), his grandson Alex, son Grant, son Wayne, grandson Ashton, daughter Angela (Walter), sister-in-law Elsie, as well as cousins, nieces, nephews and friends.
Alex attended the Catholic Immaculate Conception School, Lord Selkirk School and Electrical Trade School. During summer break he worked in the USA in the electrical trade. He worked as an electrician until retirement.
Alex was predeceased by parents, Rosalia and Dymetro; brothers, Steve and Walter; sisters, Helen, Margret, and Lorea.
The family wishes to thank the staff at Middlechurch Personal Care Home and the Grace Hospital for their compassionate care.
In lieu of flowers, memorial donations may be made to the charity of your choice.
As per Alex's wishes, a private service with immediate family has taken place. Interment will take place in the Holy Family Cemetery at the niche columbarium at a later date.