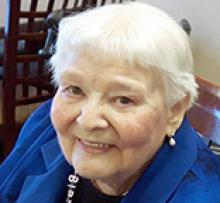 Mom passed away peacefully on August 13, 2019, with her family by her side.
Mom is survived by son Don Robertson (Marilyn), daughter Heather Boyd (Dave), grandchildren, Jason (Pam), Jennifer
(Michael), Chris and Steve, and great-grandchildren, Ariella, Benedetto and Xen.
Mom grew up in the depression when no one had any money but nobody felt poor. Mom developed her strong values early on: work hard, don't brag, don't draw attention to yourself, and most importantly, carry on in the face of adversity.
Mom was born in Kenora, but grew up in Fort Rouge. At 23 she met future husband
Allan Robertson on the Earl Grey tennis courts, a union that lasted until Dad passed away three weeks short of their 70th
anniversary.
Some of Mom's best times were spent at Falcon Beach. Mom and Dad eventually bought a cottage there where the family
gathered for many Skip-Bo games and much chip-munching.
When Mom re-entered the workforce after her family grew up, she worked 15 years as a Medical Secretary in the U. of M. Pathology Department, retiring in 1985. Mom and Dad spent their early retirement years travelling to Europe and Cuba, wintering in California, Arizona, and Vancouver Island.
Mom was an excellent cook, and loved to entertain the family with sumptuous dinners, a tradition that she continued into her 80's while residing in Paradise Village. Mom was well known for her generosity, kindness, and thoughtfulness.
When Mom and Dad's health began to need attention they moved into Dakota House where they had many good friends and
wonderful staff. After Dad passed away, Mom moved into Misericordia Place PCH. Many thanks to the staff of Apple Tree Lane for their kindness during Mom's stay and
special thanks to Tamara and Vicki who eased Mom through her final moments.
Mom was a steady light in a constantly changing world. Mom loved her family more than words can say.
Mom requested a private family service.
If desired, donations may be made to the Canadian Lung Association, Lung Research.