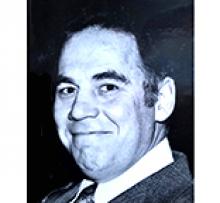 Lawrence Edwards, born November 12, 1934, passed peacefully on Saturday, August 17, 2019 in Winnipeg, Manitoba. Wynne was at his side, just as she had been since they first met almost 64 years earlier at Queen's University in Kingston, when she was 17. Theirs was a glorious affair.
Larry was born in Calgary, Alberta to Manley, a District Court Judge, and Miriam (Oatey), a librarian. His birth was followed by Kathleen (Bud Phillips) and Douglas (deceased). Larry was a student, a pianist, a singer, an athlete - a high school provincial record holder in track and a member of the Queen's Golden Gaels football team. Recruited, as so many westerners were, by Padre Laverty to attend Queen's, it was there, in his final year of a B.A., that Larry was introduced by his good friend Terry Whyte to Terry's sister Wynne, a freshman. They were married two years later, on December 21, 1957 (the longest night of the year, as Larry would often say with a twinkle) in Wynne's family home in Peterborough, Ontario. It was a decision made on the spur of the moment, as most of Larry's decisions were. Larry was then in flight-school with the Royal Canadian Air Force, where Wynne joined him five months later, after finishing her degree. Having earned his "wings" as a bomber pilot, Larry returned to his true calling, which was "service" of a different sort. In the fall of 1960, Larry and Wynne returned to Queen's with their one-year-old son Mark. Thus began Larry's second great love affair, with Christian theology and his ministry within the United Church of Canada.
From Kingston, Larry and family, which now included son Paul, went from a summer charge in Elginburg, Ontario to congregations in Big Valley and Pincher Creek, AB, West Vancouver, BC, Swift Current, SK (where third son Dan was born), a sabbatical in Scotland, then Winnipeg, MB, and, finally, Regina, SK - in Larry's words, "a prairie preacher". And a preacher he was - of the barnstorming tradition, leavened with a passion for the literature of theology. In that long journey, Larry celebrated thousands of services of worship, joining couples in marriage, honouring lives lived, and welcoming children into the world and young adults into the church. In every single one of those sacraments, he thrilled to the deep mystery of God and the human experience. Larry was passionate. His voice boomed, his gowned arms pierced space, he paced and prowled his stage, unconstrained by the pulpit. He was stormy - thunder and lightning and the calm that follows - he was challenging, he was gentle, he was loving, he was ever hopeful. He taught, he led, he embraced, he celebrated. Few who met Larry would ever forget. As Wynne said of him the day after he died: "He was always outrageous".
Larry is survived by his wife Wynne (Whyte), his sons, Mark (Elizabeth Goldsmith), Paul (Anne MacKay) and Dan (Danielle Bremaud), his sister Kathleen (Bud Phillips), eight grandchildren, Lauren, Maddie, Libby, Beth, Evan, Wynn, Adam and Vincent, and two great-grandchildren, Theo and Cameron.
A celebration of Larry's life will be held at Sunset United Church in Regina, SK at 2:00 p.m. on Saturday, October 5, 2019.
In lieu of flowers, donations to the United Church of Canada would be welcomed.