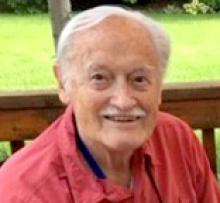 
Dr. Werner Hunzinger died peacefully in Winnipeg on August 19, 2019.
Werner was an extraordinary man in every way. He loved his family and will be missed by his three children, Verena, Marcus (Cathy) and Bettina, and his eight grandchildren, Simon, Erika, Janine, Vanessa (Frazer), Karen (Spencer), Nicholas (Hema), Michael and Evan (Rhianne), and his first great-grandson, Axel. His 93 years were well lived.
He was born in Lahr, Germany. At 17, he was drafted into the army and fought in the Second World War on the Russian front. He was wounded early on and then had to make the difficult journey back home with limited transportation, mostly on foot. In 1945, he enrolled in medical school in Heidelberg where he met Gisela, his lovely wife to be. They wed in 1953. First daughter, Verena was born. They then immigrated to Montreal so he could complete his residency in psychiatry at McGill University. Marcus was born there. Upon completion, the family moved to Winnipeg, where Bettina was born.
In 1958 he began work at the Manitoba Clinic and also assumed the role of head of psychiatric services at Misericordia Hospital. In 1970, he conceptualized, designed and supervised building of an innovative psychiatric facility at the Grace Hospital where he worked until he retired in 1991. In 1987 he was called as an expert to amend the Mental Health Act in Manitoba. He opted to return to work a few more years, after retiring from the Grace Hospital, as a consultant for the Parole Board of Manitoba. He retired at the age of 74 after 43 years of dedicated service to psychiatry. He cared deeply about treating those that lived with chronic mental health illness enabling them to lead independent and fulfilling lives.
Werner took his family on many amazing adventures all around North America, camping and boating sometimes in remote wilderness locations, including boating down the Mississippi River.
Werner's happiest moments were at his cottage on Shoal Lake spending time with his family. He always had ambitious and expansive projects on the go. He created a spectacular wilderness retreat that all his family and friends will enjoy for years to come.
He was predeceased by Ruth, his sister, who died in childhood; Gisela, the love of his life and mother of his children, who passed in 1978; Sandra van Buren, his second wife, fondly remembered for the love of the grandchildren, who passed in 1995, and most recently, Frances Martin Day Pepler who brought joy, sparkle and artistry to his later years. She passed in 2015.
Despite much adversity, Werner demonstrated remarkable resilience and optimism. His generosity, enthusiasm, grace and dignity will long be remembered by all.
A funeral was scheduled for Friday, August 23, 2019 at 11:00 a.m. at St. John Brebeuf Church, 1707 John Brebeuf Place, with a reception to follow. All are welcome to attend and celebrate Werner's life.
The family would like to thank the staff at The Wellington for their outstanding care and dedication.
In lieu of flowers, please send donations to Health Sciences Centre Foundation, PW112-700 William Ave., Winnipeg, MB R3A 1R9.