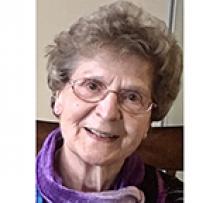 Jesmond Thompson passed away peacefully August 22, in her home in Whitehorse, Yukon.
A celebration of her life will be held Saturday, August 31, 2:00 p.m., at Stonewall (MB) United Church, (369 First Ave. N.). There will be a prior private interment in Stonewall Cemetery for immediate family.
This obituary will also appear shortly at https://heritagenorth.ca.
Born Sarah Jesmondine Lund in 1926, in Stonewall, where she grew up, Jesmond graduated from the University of Manitoba in 1946 with a BA. She taught high school in Dryden, ON, for a year, then worked as an organizer for the Student Christian Movement in Winnipeg, and at the United Church's Stella Mission, an immigrant mission in north-end Winnipeg.
In 1951, she married Rev. Glen Thompson of Davidson, SK. In 1955, Glen and Jesmond took up a church post in Berens River, before moving to Windsor Park United in Winnipeg, in 1961. Six children - Laurie (Lois Berry), Jennifer (Zack Gross), Ann Thompson Courchene, Heather Todd (Randy), Murray (Linda Wenstob), and Sheila (Mike Burdett) - came in quick succession. Life was busy with raising a family and the hosting, music playing, and Sunday School teaching of a minister's wife.
In 1972, Jesmond, Glen, and four children relocated to the new mining city of Thompson. There, Jesmond completed an Education degree and taught French. In 1988, they retired to Anola, where both were active in Anola United Church. In 2002, it was another move to Gimli, MB, where Jesmond and Glen continued to be active in community and church life at Winnipeg Beach United Church. Glen passed away in 2014. A year later, Jesmond moved to live with her youngest daughter Sheila and partner Mike in Whitehorse.
Her 500-name Christmas letter list tracked her life. She stayed in touch with a huge network of friends and family from all the communities where she had lived, by letter, phone, then email, and always as a gracious host to visitors.
Jesmond's family of six children and partners, 12 grandchildren and partners, and eight great-grandchildren remember Jesmond's graciousness, her determination and strength of will, her tolerance and patience, and her progressive social views. Above all, they remember her positive outlook on life and her love of family. Two granddaughters and three great-grand-daughters carry her names in her honour.
In memory of Jesmond, her family asks that you do an act of kindness. If you so desire, you may also donate to Indspire (www.indspire.ca) or the St. Amant Centre (www.stamant.ca).