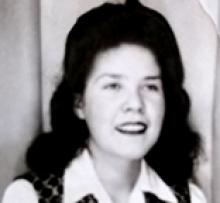 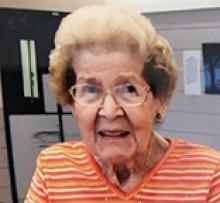 It is with great sadness we announce the peaceful passing of Rita Smith at Portage General Hospital on Thursday, August 22, 2019. Rita was born July 28, 1923, daughter of Alexandre and Denise St. Germain.
She was born and raised in the RM of St. Francois Xavier until the age of 12 when the family moved to Bay St. Paul East. There they operated a garage and store. After completing her education Rita stayed home to look after the store (Rita's Confectionary). In 1945 she married Walter Smith of Poplar Point, MB where they resided until 1985. Due to Walter's health, they moved to Portage la Prairie. Rita belonged to St. John's Catholic Church (later the Good Shepherd Parish) and the Catholic Women's League of which she was a lifelong member. During the summers Rita travelled with Walter's work with the Department of Highways. Rita enjoyed seeing the countryside during their travels around Manitoba. She enjoyed quilting with the CWL, dancing, reading and doing clippings from papers and magazines. Her greatest enjoyment centered on her children and family.
Predeceased by her parents, Alex and Denise St. Germain; her brothers, Leonid (died in infancy) and Marcel of Calgary (Rose); sisters, Josephine Larkin (Paul), Juliette Beaudin of Trenton, ON, and Alice Tremblay of Montreal; and brothers-in-law, Howard Liddicoat, Leo Carpenter and Bill Hunter.
She leaves to mourn her passing son Gordon (Margaret) of Portage, son Dean (Jeannine) of Winnipeg; grandchildren, Stacey (Matt), Ryan of Toronto, and William; great-grandchildren, Rhys and Zoe; sisters, Eva Liddicoat, Therese Carpenter-Hunter, Margaret-Rose Risbey (Arnold) of Winnipeg and Fernand Tremblay of Montreal; numerous nephews and nieces.
Prayers will be held on Wednesday, August 28, 2019 at 7:00 p.m at the Good Shepherd Roman Catholic Church, 1125 Saskatchewan Ave. E., Portage la Prairie. Funeral service will be held on Thursday, August 29, 2019 at 11:00 a.m. at the Good Shepherd Roman Catholic Church.
In lieu of flowers, donations may be made to the Poplar Point Cemetery, Box 172, Poplar Point, MB R0H 0Z0.

Messages of condolences can be made online
at www.omegafuneralhome.com