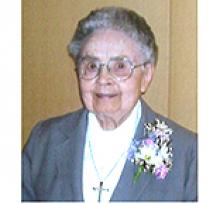 
Sister Thérèse Chaput went peacefully to meet her Lord and Saviour, on August 24, 2019, at the age of 102.
She was predeceased by her parents, Arthur Chaput and Maria Baril, her sisters: Flavie, sds; Hélène, snjm; Héloise Magnan (Marius); Germaine; Blandine, sds; Lucie Rossier (Paul); Gabrielle Courchêne (Lévi); and her brothers: André; Norbert (Emma); François-Xavier (Eliane); Louis de Gonzague (Marie-Ange); Roland, omi; Camille (Alice); Joseph; and René Delorme (adopted). She leaves to mourn her religious community and many nephews and nieces.
Thérèse was born in Letellier on November 21, 1921, being the eighth child of a family of 15 children. The family moved to St. Adolphe when she was eight years old. It was with the Sisters of the Cross that she pursued her education. As a family, she was influenced by the dedication and love of her parents. They enjoyed reading missionaries' stories. Such books touched and inspired Thérèse to become a Grey Nun missionary.
On February 5, 1937, she entered the Grey Nuns' Noviciate in St. Boniface. After her years of formation, at the request of her superior, Sister Thérèse was asked to teach young children in Lebret, Saskatchewan. Her success as an elementary teacher and catechist convinced her to pursue her studies in education.
For the next 45 years, Sister Thérèse's love and gifts as catechist and teacher were greatly appreciated by parents and children in Berens River, Chesterfield Inlet, Fort Smith, Fort Resolution, Hay River, Fort Simpson, Inuvik and Yellowknife.
Having returned to St. Boniface in 1992, she accepted to coordinate a welcoming project for visitors at the Grey Nuns Provincial House. She continued to serve with joy until 1999.
Her health started to decline in 2011. She was then admitted at Actionmarguerite (Taché Centre).
The Grey Nuns and family wish to thank the personnel at Despins Residence and Actionmarguerite (Taché Centre) for the compassionate care given to Sister Thérèse during her illness.
The Funeral Mass for Sister Thérèse Chaput will be celebrated at 151 Despins Street by Father Isaïe Blanchette, omi on August 28, 2019 at 1:30 p.m., preceded by prayers and eulogy at 1:00 p.m. Interment will follow in the St. Boniface Cemetery on Archibald Street.

Family and friends may sign a
book of condolence at www.desjardinsfuneralchapel.ca.