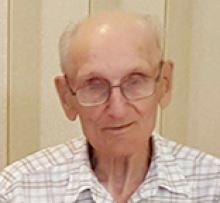 Peacefully on August 23, 2019 Walter (Lodge) Strilec passed away in Portage District Hospital.
Walter was born in Bloom, Manitoba, third son of Paul and Pauline Strilec. Walter was predeceased by his brothers, Leonard, Joseph, Paul, Deacon Michael, and an infant sister.
Walter is survived by his wife Jean (Krawchuk), of 69 years, son Barry (Marilyn) and Robert (Val and Erin), grandsons, Kirk (Kate) and Shawn (Stephanie), great-grandsons, Lochlan and James, sisters-in-law, Effie (Joseph), Helen (Paul), and numerous nieces and nephews.
Walter started with CN Rail at the age of 16. He then left CN Rail to join the Canadian Armed Forces and served from 1942 to 1945, in Ontario, Alberta and Manitoba at various camps.
After the war he returned to CN Rail working in different locations in Saskatchewan and Manitoba. He retired in 1984 as Road Master in Portage La Prairie after 42 years of service.
Walter enjoyed life. In younger years he enjoyed curling and fishing. His church family was very important to him, as he was active member of the Church of Assumption. He always enjoyed the various celebrations at the parish hall. In later years Walter and Jean enjoyed bus trips to different casinos.
The family would like to thank the staff on the Medical and Palliative Care units at Portage District Hospital. The family would also like to thank Dr. Finney for his care and compassion during Walter's stay at the hospital.
Memorial Mass was held at the Omega Funeral Home, 83 Royal Road S., Portage la Prairie on Monday, August 26, 2019 at 10:00 a.m. Interment to follow at Hillside Cemetery.
Donations can be made to the Ukrainian Catholic Church of Assumption, 620 1st St. NW, Portage la Prairie, MB R1N 1Z7.