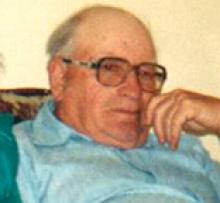 Wilfred Henry Kraushar was born May 15, 1925 and passed away on August 24, 2019. He died of cancer and old age. Wilfred was the third son of George and Theresa Kraushar. He lived his entire life on his farm in the Dugald area except for a brief period of time when he worked in British Columbia.
His farm produced cereal crops, trees, fruit and vegetables. Wilfred was justifiably proud of his yard and garden. He kept relatives and visitors amply supplied with saskatoons, raspberries, strawberries, asparagus, apples and watermelon.
Wilfred enjoyed watching sports on T.V. and curled at the Springfield Curling Club for many years. Fishing at Lockport was a favourite activity. His love for cats was displayed by taking care of many strays over the years.
He was predeceased by his siblings, Lillian (Robert) Anderson, Elsie (Art) Lazier, George (Aileen) Kraushar, Dorothy (Clarence) Creek, Florence (Steve) Miller, Arnold (Margaret) Crozier, Rob (Audrey) Kraushar.
Wilfred is survived by his sister-in-law Audrey Kraushar, and 21 nieces and nephews and their families.
Special thanks to the medical staff at Selkirk Hospital for the care provided during the last few weeks of his life.
A funeral service will be held on Friday, August 30, 2019 at 11:00 a.m. at Seasons Funeral Chapel, 576 Balsam Crescent in OakBank, Manitoba. Interment will be at Millbrook Cemetery.
In memory of Wilfred, donations can be made to a charity of choice.