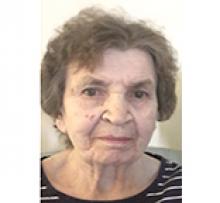 
Saddened by the loss, but in celebration of a beautiful life, the family of Pat Abuda announce the passing of dearly beloved wife, mother, grandmother and great-grandmother at 85 years of age, on September 2, 2019.
Pat was predeceased by her husband of 35 years, John in 1989; sister Anne (2008); and brothers, Stan (2014) and Johnny (1986).
She is lovingly remembered by her children, Sharon, Daniel (Mia), Brian (June), and David; along with her grandchildren, Ryan, Tarryl (TJ), Shaun, Janessa, and Alex, Alisa, Bryce and Pierce; and the great-grandchildren. Also, brothers, Bruce and Dennis; and sister Rose.
Pat was born in Teulon on March 4, 1934 and was raised on the Kowalchuk family farm west of town during the Great Depression and Second World War. Although times were tough and money was scarce, Pat always had fond memories of her family's strength and resilience growing up with her brothers and sisters. Pat was a wonderful storyteller, conveying the values of love, humility, appreciation, persistence and hard work, through her childhood stories about farm chores, her mother's exploits ordering from the Sears catalog, working in the garden, walking home from school the long way with siblings and friends, hayfield baseball, summers with city cousins who stayed on the farm and so many more.
After graduating from the Teulon Collegiate at age 17, she took the 75-cent bus ride from Teulon to Winnipeg where she worked as a waitress at B & B Restaurant on Main Street. Pat later returned to Teulon and worked at the Toronto Dominion bank for three years until her marriage.
In 1955 Pat and John were married in Teulon and moved to Winnipeg. During the next 30 years, Pat and John raised their four children in St. James and Pat worked at several jobs during this time. She continued operation of the little Hampton Grocery Store across from the Britannia Elementary School during the 1960s. Later, in the 1970s she worked in the sporting goods department at Canadian Tire, then as the manager of the shoe department at Zellers. Pat was also the bookkeeper for John's business and had her own home day-care business for many years.
After the passing of her husband John in 1989, Pat sold the family home in St. James and decided to travel to see many places in Canada, visit far away relatives and spend time with her adult children and grandchildren who were no longer in Winnipeg, living for some time in Sparwood, B.C and Leftbridge, AB. Pat also returned on and off to Winnipeg during these times and you would be hard pressed to find a street in Winnipeg this adventurous woman did not live on. This part of her life went on for the better part of 20 years until she returned to Winnipeg to stay several years ago.
Visits with Grandma were oh so cherished. Fond memories of cooking, crafting, painting, and making papier-mache are some of our favourites. Taking the bus to every mall in the city, watching hours of Judge Judy, listening to Johnny Cash, storytelling and laughing. These are the precious days we wish we could relive.
It was in 2016 that Lewy Body Dementia begin to pull our sweet mother and grandmother from us all too soon. In true stubborn Ukrainian fashion, Pat battled with this disease tenaciously until The Lord called her to reunite with her one and only true love, John after almost 30 years. The family would like to extend sincere appreciation to the care workers at Middlechurch Home of Winnipeg, where Pat spent her last few years.
A private family memorial will be announced and held at a later date.