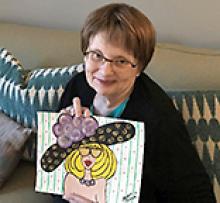 In the wee hours of September 5, Eleanor's fight with cancer ended in dignity and peace. Eleanor had maintained a positive attitude and battled valiantly - never loosing hope.
Eleanor is the third born of George and Mary (Anseeuw) Taillieu having entered the world on June 10, 1950. Big brother Lawrence and sister Marlene were there welcoming her. Rounding out the family were sisters, Dorene and Diana. Eleanor met her husband with a little help from her mother at her second home, the Belgian Club. Eric and Eleanor were married April 16, 1983.
Eleanor completed her Business Commercial course at St. Mary's Academy and worked many years in the grain and oil industry, reluctantly retiring in 2016 from Tundra Oil and Gas.
Her passions were cards (canasta and Bien), bowling - both 10 pin and Belgian, archery, a little VLT/bingo action and being an armchair viewer watching sports - just like her dad. Eleanor strongly believed if you belonged to an organization then you were to be an active participant in making it a success. To this end, Eleanor served on the board and committees of the Belgian Club, St. Sebastianette Archery Club and the Manitoba 10 Pin and the Nairn 10 Pin Associations.
Eleanor is survived by her stepchildren, Pamela and Bradley and her grandson Finn, who was the apple of her eye. Also leaving to remember her are sisters, Marlene Lodge (Mike), Dorene Rosmus (Jerry) and Diana Noble (Barry), brother-in-law Ken (Carol) and sisters-in-law, Janice and Cheryl. She had many nieces, nephews, great-nieces and great-nephews who will miss her deeply. Eleanor loved to be part of family celebrations and seldom would miss. She was predeceased by her husband Eric, parents, George and Mary Taillieu, brother Lawrence, brother-in-law Gerry Bavington, as well as parents-in-law, Harry and Marge.
Many thanks to all who supported Eleanor in her journey as she battled the cancer. To her family and friends who visited and made her laugh and to the health care workers at CancerCare, Deer Lodge Centre and the Grace Hospital, your support and love did not go unnoticed.
Mass of the Christian Burial will be celebrated at St. Bernadette's Parish, 820 Cottonwood in Windsor Park on Tuesday, September 10 at 11:00 a.m. with Fr. Phil Daley officiating. Lunch and reminiscing to follow at the Belgian Club, 407 Provencher. Private interment at a later date.
In lieu of flowers, please make a donation to a charity of your choice.