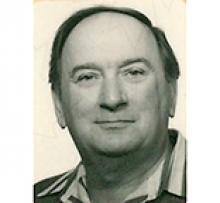 
Benny is survived by Olga (Skoroda), his wife of 60 years, and daughter Linda.
Born in Titel, Yugoslavia (Serbia) August 14, 1932, Ben lived in a small town with his parents Andreas and Rosina and baby brother Stephen. This area was settled many years ago by Germans known as Danube Swabians. With the outbreak of war and the reign of Tito, the communist President of Yugoslavia, all Germans and non-communists were put into camps. Ben and his family suffered the loss of their property and he, his mother and baby brother were marched into the concentration camp in Bachki Yarek. Ben's father was forced to join the army. Ben survived the camp but not his mother or brother and he found out years later his dad passed away in Salzburg. With losing his family, he then endured the slave camps in Novi Sad "Subatica" and labour camp of Zenica in Bosnia.
After the war, Ben biked across Europe to Cologne, Germany where the nuns in the Cologne Cathedral took him in and gave him a temporary home. Ben became a Bridge Fitter working on repairing the Cologne Bridge. Being young and ambitious, he saved his money and came to Canada on the ship Sitmar in 1954.
Ben became a heavy duty mechanic and collected many great cars over the years. He met his future wife while with friends at the Assiniboine Park. Ben and Olga were married in 1958 and soon had their daughter Linda. While both working day jobs, Ben and Olga gradually bought several rooming houses on Young Street and Maryland, working many evenings cleaning and renovating. Life was full as well with going to A&W drive-in on Portage Avenue, being served by the hostesses, dinners at Champs on Sherbook, milkshakes and fries at truck stops and many trips across Canada and the States. Ben later sold the houses and had an auto electric business in Morden, then on St. Mary's. Ben wanted to retire early and at 55 years of age, did so. He enjoyed bowling, playing the accordion, going out for coffee and many summers visiting relatives in Cincinnati and Milwaukee.
In compliance with his wishes, a private funeral will be held. He will be buried at Brookside Cemetery.