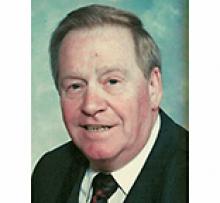 
David passed away peacefully on Friday, September 6, 2019 at the age of 86 years.
He was the beloved husband of Mona; loved father of Deb (Garry) and the late Jeffery (Janet), and stepfather of Dan (Sharon) and Syndi. He was the cherished grandpa of Raena, Jacob, Angela, Malachi, Matthew and Robin.
David was a longtime employee of Winnipeg Hydro until his retirement in 1993. He was a member of the Dormer Mount Sinai Lodge #188 and a member of Khartum Temple of Winnipeg Shriners and spent happy years riding his Harley as a member of the Cycle Escort.
Memorial service will be held at 2:00 p.m. on Wednesday, September 11, 2019 at Klassen Funeral Home, 1897 Henderson Highway. Private interment will take place at a later date.
In lieu of flowers, donations in David's memory may be made to Good Neighbours Active Living Centre Endowment Fund, 720 Henderson Highway, Winnipeg, MB R2K 0Z5, or a charity of your choice.