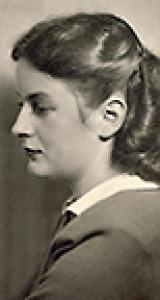 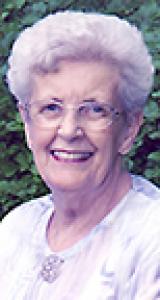 Two life-changing historical events occurred on October 29, 1929: The stock market crashed and our dear mother was born in Shropshire, England! Mum never let us forget the significance of her birthdate.
Whether by choice or by happenstance, Mum lived a life of adventure. From her youth boarding at The Welsh Girls School during wartime when they were evacuated to Powys Castle, to young adulthood living in Geneva working for the UN, to sailing across the Atlantic from England with Dad, first babe in arms, to settle in Niagara Falls, ON, Mum took it all in stride, never complaining, demonstrating strength and acceptance for all life offered. For the first half of their married life, Mum frequently followed Dad, who'd often moved on ahead of her, to jobs and life in rural Québec and Fredericton, with increasing numbers of children, always returning to Niagara Falls. She deftly learned the ways of each new town or city, mostly by short cuts to hockey arenas, quickly becoming a part of the community, usually through involvement in her parish. In 1973, we finally settled in what Mum initially considered 'dreaded' Winnipeg, but she soon realized this was the most welcoming, warm, big 'little town' she could ever have found for her family. This life of frequent moves led Mum to build life-long friendships the world over, maintaining those ties, mostly by post alone. Mum's lengthy Christmas card list was truly impressive and a testament to the bonds she developed and the place she held in the hearts of many.
While raising five children, Mum modelled for us the responsibility to give of time and talent by volunteering with many groups and organizations including: Fort Garry Community Network, St. Paul's Anglican Church, Fort Garry Community Centre, and basically anywhere a hand was needed. Her hobbies over the years included: quilting, sewing, knitting, crocheting, completing cryptic crosswords, reading mysteries, watching Jeopardy, hosting dinner parties, gardening, practicing Tai Chi, belonging to various bridge groups, playing tennis and badminton at the Wildwood Club and travelling, mostly with Dad, to New Zealand, Fiji, various parts of Canada and the U.S., on cruises to the Caribbean, Alaska and Panama Canal and of course frequently returning 'home' to her beloved England and Wales. In addition, Mum used her talents to show a special pride in her grandchildren, stitching wall hangings and samplers to mark their births.
Recently Mum said, "Don't be sad, I've lived a long and happy life." She was guided by her faith to the certainty of life eternal, firm in the knowledge she will live on in the many lives she touched and most especially in us, her devoted and beloved children.
In 2008, Mum was predeceased by her loving and loved partner in life, our dear Dad, Peter. Predeceased by older brother Robert, she leaves younger sister Elizabeth and many nieces and nephews in the U.K. After four and one half years living with grace, dignity and appreciation for her caregivers at the Convalescent Home of Winnipeg, Mum died peacefully, wrapped in the loving embrace of her children, Amanda, Dave (Carolyn), Mark (Jan), Tim (Barbro) and Trish (Rob). Granny will be remembered with fondness and respect by Mike (Andreea), Marney, Jessica, John and Olivia.
We are eternally grateful for the love and care shown by the staff of the Convalescent Home of Winnipeg. Mum felt secure in your care and proud to know your names and countries of origin (her knowledge of geography was astounding to the end!) We are also thankful that she was blessed with visits from many dear friends, especially members of her St. Paul's Church family.
We invite you to gather with us as we celebrate Mum's life with a memorial service on Saturday, September 21, 2019 at 3:00 p.m. at St. Paul's Anglican Church, 830 North Drive.
In lieu of flowers, donations may be made to St. Paul's Anglican Church, 830 North Drive, Winnipeg, MB R3T 0A6, The Movement Centre of Manitoba, 1646 Henderson Hwy., Winnipeg, MB R2G 1N7 or The Convalescent Home of Winnipeg, 276 Hugo St. North, Winnipeg, MB R3M 2N6.