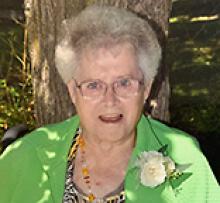 On Friday, September 13, 2019, at the Lions Prairie Manor, Rita passed away, with family by her side, at the age of 86.
Rita was born on September 1, 1933 in the Netherlands, daughter of Hendricus and Regina Traa. She resided in Achterveld until immigrating to Canada with her parents and siblings in 1954. She worked at various jobs before marrying Adrian Van Aert in 1957 and they lived in St. Andrews. In 1974 they purchased a farm in the Gainsborough district where they farmed until retiring in 1995. Rita enjoyed residing at the Lions Prairie Manor where she appreciated the excellent care she received. She will be remembered for her kind heart, gentle ways, and love for her family.
Rita was predeceased by her parents, her husband Adrian, son George, brother Martin, and several siblings-in-law.
Left to treasure her memory are her children: John (Doris), children, Melissa (Chris) Martin and their son Noah, Kathleen and Carey; Regina (Paul) Lapratte, children, Chantale (Mike) and children, Dominic, Logan and Sawyer, Daniel (Robin); Richard (Susan), children, Evan and Garrick (Sara); Marilyn (Dan) Gagnon, children, Ashley and Amanda; Adrian (Bonnie), children, Jace Hancock (Sheilagh) and their children, Canaan and Shaye, Jill Hancock (Dale) and their children, Ryatt and Emree; Paul (Patty), children, Braden, Madison, Stephanie (Wade) Campbell and their children, Taia and Peyton, Ashley (Ron) Toews and their daughter Raina; Neal (Diane), children, McKenzie and Jordan; as well as her siblings, Greta Koreman, Wilhelmina Mensing, Gerry (Noelline), Hank (Mia), Ted (Cecile), Tina Lafreniere, John (Anne-Marie), Helen (Peter) Zervini, and siblings-in-law, Baiba, Corrie Van Aert, Cathy (Fred) Van Gompel and Kees Van Aert, as well as many nieces, nephews, friends, and special friends who are like family, Rolf and Nico Kamp.
Prayers will be held on Wednesday, September 18, 2019 from 7:00 p.m. to 8:00 p.m. at the Omega Funeral Home, 83 Royal Road S., Portage la Prairie. Funeral Mass, led by Father Gerald Langevin, will be held on Thursday, September 19, 2019 at 11:00 a.m. at the Good Shepherd Roman Catholic Church, 1125 Saskatchewan Avenue E., Portage la Prairie. Interment to follow service at Hillside Cemetery.
In lieu of flowers, donations can be made to Good Shepherd Roman Catholic Church, 1125 Saskatchewan Avenue E., Portage la Prairie, MB R1N 3Y8 or Lions Prairie Manor Foundation, 24 - 9th Street SE, Portage la Prairie, MB R1N 3V4.

Messages of condolences may be made
online at www.omegafuneralhome.com