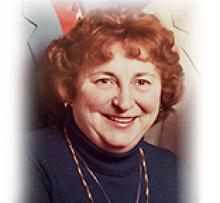 Emily Leskiw, devoted mother and grandmother, passed away quietly early Friday morning, September 13, 2019 at Seven Oaks Hospital.
Emily was born on May 13, 1931 in Winnipeg to Stefan and Katherine Mudlo. She was the middle child with red hair and as such there was never a dull moment around her. Her brother Steve and sister Helen shared many stories of fun, mischief and practical jokes. Emily grew up and went through grade 12 in the "North End".
Emily met the love of her life, Stephen Leskiw and they were married June 7, 1952 at Sts. Vladimir & Olga Cathedral. Emily and Steve built their life in Transcona. They were active and well known members of St. Michael's Ukrainian Catholic Church.
Together they had two children, Michael (Evelyn) of Red Lake, Ontario and Valinda Bennett (Gary) of Transcona. Emily and Steve enjoyed three grandchildren, Amanda and Megan Leskiw and Owen Bennett. Emily is lovingly remembered by her neice Linda (Youry) and children, Chelsea and Stefan of California. This love is also shared by her nephews, Allan, Donny, David, and Brian Franchuk. Emily's cousins remained close all her life and together also made many great memories together.
Emily would say, "I'm not always understood by everyone my age, but I have a great time with children and old people." This statement was true to form, as she always made the youngest to oldest feel special.
Emily and Steve loved to travel and every summer when not at Grand Marais, they headed out on an adventure. They managed to see most of the United States and Canada with their family. In later years they wintered in Texas and 1000 Palms, California, near her brother Steve and wife Wilma.
Emily was predeceased by her husband Steve (2012); her sister Helen (1970); brother Steve (2002); and sisters-in-law, Wilma Mudlo (2018) and Steffie Franchuk (1992).
Divine Liturgy will be held Wednesday, September 18, 2019 at 11:00 a.m. at St. Michael's Ukrainian Catholic Church, 400 Day St., Transcona. Officiating will be Very Rev. Fr. Mark Gnutel. Interment to follow at All Saints Cemetery.
The family wishes to thank the doctors and staff of Holy Family Home as well as the doctors and special nurses on the third floor unit 12 at Seven Oaks Hospital. All provided outstanding care for Emily and support for her family.
Pallbearers will be Allan, David and Donny Franchuk, Noel Ferrer, Greg Kraj and Sean Alcorn.
In lieu of flowers, the family would appreciate donations to the Alzheimer Society of Manitoba - Dementia Care and Brain Health, or Holy Family Home of Winnipeg.