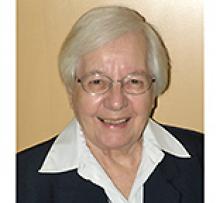 
Sister Diane Belisle, RNDM, died unexpectedly at Actionmarguerite-Taché Personal Care Home in Winnipeg, in the late afternoon of September 12, 2019. She was 84 years of age.
Diane was preceded in death by her parents, Lionel (1985) and Liliane (Girardin) Belisle (1995); three brothers, Gilles, Joseph-Laval and Real; and her sister Laurianne.
She leaves to mourn her passing four brothers: Guy (Bernice) of Chilliwak, Claude (Doreen) of Lac La Hache, BC, Viateur (Laura) of Cranbrook, Roger (Pauline) of Winnipeg; and three sisters: Sister Rose-Aimee Belisle, RNDM of Regina, Laurence Postnicks (Gunnar) of Great Falls, MB, Caroline Tetreault of Ste. Agathe, MB; her religious community, the Sisters of Our Lady of the Missions; and numerous nieces and nephews.
Diane was born in St. Victor, SK on July 26, 1935, a beloved daughter to Lionel and Liliane. In this faith-filled Francophone family, Diane became rooted in her Catholic faith, her language, her culture. In 1939 the family moved to Elie, MB where she attended elementary school and later became a boarder at Elie Convent where she met the Sisters of Our Lady of the Missions (RNDM).
In 1953, Diane entered the RNDM novitiate in Longueuil, QC and began her journey to become part of the RNDM religious community. She made her perpetual vows in Regina, SK in 1959.
Over the course of her religious life, Diane taught for 22 years in various public and private schools in Winnipeg and rural Manitoba. In 1975-1976 she took part in the RNDM Tertianship program in Rome and this experience opened Diane to larger worlds, initiating her sense of being a global citizen. While she enjoyed teaching, Diane also had an inclination to serve in Peru, to "cast her lot" with the poor and suffering of Latin America. As she discerned this call, she began to learn Spanish, and after considerable prayer, in January 1997, she set out to join other RNDMs working in Peru. This was another "life-shaping" time in Diane's life. She loved the vivacity and genuineness of the people and the beauty of the country.
Returning to Canada in 2003, Diane became involved as a volunteer in development and peace. Her years overseas had given her a heightened sense of the ways Canadian policy contributes to global poverty, and she chose to work for justice. She was also involved as a volunteer with St. Boniface Cathedral serving as a communion minister to shut-ins, in Healing Ministries, in a Christian meditation group, and responding wherever she saw a need.
In 2015, Diane moved to Résidence Despins, and immersed herself in a community of her peers. In this new context, she appreciated having more time to read, to pray, to learn, as well as to visit with family and friends.
Diane learned she had stomach cancer about a year ago and knew her time on earth was limited. She wanted to live her death well, as another part of life. Still, death came relatively quickly for Diane. She moved to Actionmarguerite Taché on September 7 and died five days later.
The Sisters of Our Lady of the Missions are most grateful to the residents and nursing staff at Résidence Despins and Actionmarguerite Taché for the care given to Diane.
Prayers and eulogy will be on Wednesday, September 18, at Résidence Despins, 151 Rue Despins at 1:00 p.m. with Funeral Mass of the Resurrection following at 1:30 p.m. with Rev. Louis Légaré OMI presiding. Cremation has already taken place, and interment will occur at a later date.
In lieu of flowers, friends may wish to send a donation to the Mission Fund of the Sisters of Our Lady of the Missions, 393 Gaboury Place, Winnipeg, MB R2H 0L5.