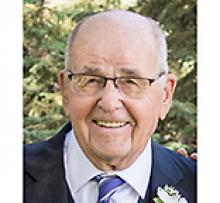 
It is with broken hearts we announce the passing of our cherished Father and Gigi, surrounded by his loving family, on September 14, at the age of 90.
He was predeceased by his loving wife Anne, sons, Billie and Matthew, special sister-in-law Olga, and brothers and sisters.
He will be greatly missed by his daughter Cathie, son-in-law Andy, grandchildren, Brittanie (Jeremie), Matty (Rachel), and his fur grandbabies, Bella, Teemu, Zoey and Walby.
Gigi met and married Anne in 1953. Gigi was a chef for the D.N.D. and later for Canex Catering. But his greatest job of all was being an amazing dad and Gigi. He supported his grandchildren in all endeavours throughout their whole lives, they were truly the apple of his eye.
Gigi was heavily involved with St. Joseph's Church and the Knights of Columbus Father Shyshkowich council. In 2000, he was recognized as Knight of the Year in Manitoba.
Anyone who knew Gigi had the fortune of having their bellies filled with his delicious perogies and butter tarts. His yummy treats, selflessness, care and compassion will be missed by all.
The family would like to thank Dr. Kevin Saunders, the nurses and health care aides 5th floor, Unit 5 at Seven Oaks Hospital, and Cam Krisko, PA, for the amazing care given to our Gigi.
A prayer service will be held Thursday, September 19 at 7:00 p.m., followed by a funeral service Friday, September 20 at 10:00 a.m. both at St. Joseph's Ukrainian Catholic Church, 250 Jefferson Ave., with Father Dmytro Dnistrian CSsR officiating.
In lieu of flowers, contributions may be made to Swimmingly Manitoba - 10 Rushmore Road, Winnipeg, MB R2G 3L6 - www.swimminglymb.org