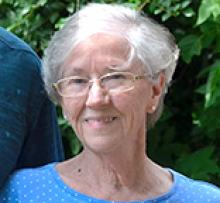 At St. Boniface Hospital on September 11, 2019, and after a year long battle, at the age of 82, Marie Janet Elizabeth Hollins graduated into the presence of the Lord that she served.
Marie was born July 2, 1937 in Reston, MB to Harry and Janet Bitze. She was the eldest of seven children and took that role very seriously. Her parents were also foster parents to many children and she helped care for them as well.
Marie married Wayne, the love of her life, on June 20, 1959. This past June they had the privilege of celebrating their 60th wedding anniversary.
Marie attended high school at Tech Voc and throughout her life had worked for several organizations such as Sovereign Life and The Bay, but her greatest joy was working for the Winnipeg Christian Counselling Group where they all benefited from her attention to detail.
In 1962, Wayne and Marie built a house in Crestview, where they continued to live up to her passing. Marie loved baking. She was known for making, what her family considered to be, world famous butter tarts and gum drop cake. She also loved journaling and continued to seek God's teaching in her life.
Wayne and Marie have attended Grant Memorial Church since 1955 and in their healthier years were active participants in helping the church grow. They taught Sunday school together, Wayne served on the Deacons Board, and Marie as a Deaconess and member of numerous committees and groups.
In the last days of her life, Marie continued to look for opportunities to share her faith with those she came in contact with. She would often share her story with the staff and patients on the Dialysis Unit and told her caregivers that she was not afraid to die because she knew where she was going and who was waiting to greet her in heaven.
Wayne and Marie have three children, Cheryl (Rob), Timothy and Bruce (Monica). They are also blessed with six grandchildren, Ian (Stephanie), Bryce (Sabrina), Allison (Michael), Joshua (Kaylee), Melissa and Kathryn. They also have two great-grandchildren, Emily and Clark. Marie loved them all so much.
Marie was predeceased by her father, Harry, her mother, Janet, as well as brothers, Ken and Wayne. She is survived by her siblings, Leona, Art (Lidia), (Lenore), Garry (Caroline), Shirley Ann (Tom), as well as Wayne's siblings, Barry (Laurie), Dorothy, Joan, Sandra, Judy (Bob) and Janis, as well as many nieces and nephews.
A celebration of Marie's life will be held at 10:00 a.m. on Saturday, September 21, 2019, at Grant Memorial Baptist Church, 877 Wilkes Ave. in Winnipeg.
In lieu of flowers, the family is asking that donations be made to Union Gospel Mission or to CancerCare Manitoba.
The family would also like to thank the staff at St. Boniface Hospital and the Dialysis Unit at Health Sciences Centre for the love and care they showed to Marie over these last few months. We would also like to thank Chapel Lawn for the care and assistance they have provided. Also thank you to family and neighbours for their beautiful and caring spirit to us. We are so grateful.