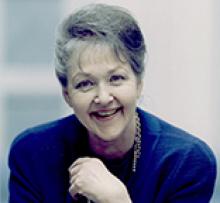 Kathleen Margaret Richardson passed away peacefully at 91 years of age with family and friends by her side on September 14, 2019, at the Grace Hospital in Winnipeg.
Kathleen was born in Winnipeg on May 5, 1928, daughter of the late James and Muriel Richardson. She was a much beloved younger sister to Agnes M. Benidickson, the Hon. James A. Richardson and George T. Richardson, all of whom predeceased Kathleen. She will be fondly remembered by her sisters-in-law, Shirley Richardson (James) and Tannis Richardson (George). Kathleen was adored by twelve nieces and nephews, twenty-nine great-nieces and nephews, all their spouses and partners, and eighteen great-great-nieces and nephews. Known simply as "Aunt", Kathleen was a confidante, counsellor, travel companion, storyteller, and picnic partner to all.
Educated at Riverbend School, Bishop Strachan School and the University of Manitoba, Kathleen graduated with a Bachelor of Arts degree (1949) and received her Honorary Doctorate of Laws (1989). She was appointed: an Officer of the Order of Canada (1973); a Companion of the Order of Canada (1994); as well as a Member of the Order of Manitoba (2005). Kathleen also received: the University of Manitoba Jubilee Award (1975); the Edmund C. Bovey Award, Council for Business and the Arts in Canada (1991); Arts Champions Award for Arts Patronage, Winnipeg Arts Council (2007); and the Royal Canadian Academy of Artists Medal for outstanding contribution to the Arts (2007).
Kathleen served as a Director of James Richardson & Sons, Limited from 1954 to 1998. Following her retirement, she was appointed Director Emeritus in recognition of her outstanding contributions to the Firm. In addition to her lifelong engagement with JRSL, she held numerous other corporate Board appointments including: Director, Sun Life Assurance Company from 1978 to 1998; Director, Barclays Bank of Canada from 1984 to 1994 and Director, Gulf Canada Limited from 1977 to 1987. While in the vanguard of women serving on major corporate boards, it is for Kathleen's unwavering commitment to the Arts in Winnipeg and across Canada that she is most fondly remembered.
A long-time champion of the Royal Winnipeg Ballet, Kathleen's volunteer support and service are credited with helping elevate the RWB to its world-class status. She served as President of the Royal Winnipeg Ballet from 1957 to 1961 and Honorary President of the RWB from 1963 to the time of her passing. Among the numerous successes achieved on behalf of the RWB, Kathleen chaired the fundraising campaign for the Ballet's permanent home, which officially opened in downtown Winnipeg in 1988.
Kathleen's other community involvement included: National Executive Committee Pan-Am Games Society 1964-1970; Canada Council 1964-1970; Manitoba Arts Council 1969-1973; Board of Directors and Executive Committee, Institute for Research on Public Policy 1972-1978; Advisory Board, The Winnipeg Foundation 1971-1982; Co-Chair, Furnishings Committee, Dalnavert (Manitoba Historical Society's Macdonald House) 1970-1974 and subsequently, Dalnavert's Visitors' Centre Committee 2003-2007; Governor, Stratford Festival 1983-1986; Governor, Winnipeg Art Gallery 1983-1991; Manitoba Government's Education Review Commission in 1992; and Chair of Manitoba Foundations' Council 1999-2001.
Throughout her life, Kathleen remained a quiet philanthropist. She contributed to numerous worthwhile causes both personally and through her Foundation. Always preferring to remain anonymous, Kathleen's extraordinary generosity improved outcomes for individuals, organizations and communities across Canada. She believed strongly in the words often quoted by her mother, Muriel Richardson, "Unto whom much is given, much is also required."
To all her encounters and endeavours, she brought an abundance of common sense, infinite patience and a remarkable sense of humour. Businesswoman, community volunteer, champion of the Arts, proud Canadian, and much loved friend, Kathleen Margaret Richardson will be greatly missed by all who knew her.
Kathleen's family wish to express their deep appreciation to Francis Opina and Team KMR, the devoted caregivers who made it possible for Kathleen to enjoy her final years with grace and comfort; and to Joan Richardson whose affection and support for Aunt has been legendary and long-standing.
A celebration of Kathleen Richardson's life will be announced at a later date.