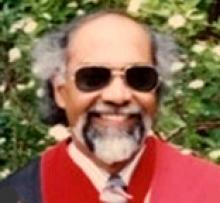 Deo grew up in a loving family and village community environment. He attended the Elementary and Secondary Canadian Mission Schools (Presbyterian Church) prior to admittance at the UWI (University of the West Indies). After a brief stint teaching at his Alma Mata - Iere High School, he attended the University of Manitoba in 1965 on a Canadian Government Scholarship. With his B.A. / B.Ed. in hand, he taught at Collegiates in Virden and Winnipeg making many new friends along the way. On completion of his M.Ed. at the University of Manitoba, he furthered his graduate education at the University of Toronto (OISE).
Brandon University came calling and Deo became a Professor in the Indigenous Access Program. He was elevated to Administration at BU. Deo took leave from BU to complete his Ph.D. at the University of Oregon in 1978 and returned to BU. In 1979, he moved to the U of M as Director of the Access Program and Special Pre-Medical Program for First Nations students. These programs achieved National Awards for their contribution to the development of First Nations education.
Deo's approach to exemplary scholarship, his work ethic, tenacity and ability to cooperate with other stakeholders resulted in the establishment of a Ph.D. program for Aboriginal scholars at U of M in 2007. Deo taught in the area of Teacher Training and lately in Adult Education. He also served as Associate Dean in the Faculty of Continuing Education at U of M. He was a disciplined effective teacher, professor and administrator.
Deo reviewed and published numerous articles and books and served on many National and International Organizations He was an evaluator of a major Secondary Education Management Program (SEMP) in Trinidad and Tobago. He served as Assistant Director of the OCOD - CIDA Program in the Caribbean and Guyana. He was President of the Canadian International Education Society (CIESC) and was a Board Member of the Canadian Society for the Study of Education (CSSE). He was also a member of the Executive Board of the Canadian Commission for UNESCO from 1994 to 1999. For his service to the Community, the Nation and wider world, Deo was awarded the Queen Elizabeth Diamond Jubilee Medal in 2012.
Deo was not only an academic scholar - par excellence - he was a humanist helping many needy causes, personally and financially. He was deeply involved with his extended family, siblings in Trinidad and England as well as friends including his unofficial adopted family here in Manitoba. He loved his only son, Alex, very dearly. We will miss his humour, presence and enlightenment but not forget his footprints on the sands of time.