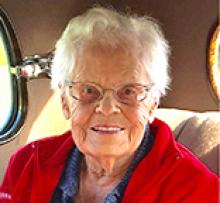 Knowing she was loved and cared for, our devoted mother Alfhild, passed away at Lac du Bonnet Nursing Home on September 12, 2019, at the wonderful age of 103.
She was predeceased by her husband Tom; her parents, Matilda and Herman Halverson; as well as her six siblings, Harry, Evelyn Lumsden, Frank, Ragnar, Helena Sandstrom, Hilda Myers; and her great-grandson Cameron Johnson.
Alfhild leaves to mourn sons, Glen (Angela), Barry (Gerry); her treasured grandchildren, Brandy Laporte (Rene), Chris Johnson (Tamara), Sandy Popeil (Jonathan) and Steven Johnson (Catherine). She was blessed with four great-grandchildren, Cameron, Taylor, Hannah and Carter.
Mom had a long and interesting life. Born and raised on a farm near Moore Park, MB. When Alfhild was only 12, she looked after her father and six siblings after her mother died. She grew up quickly and was robbed early in life of a carefree childhood but learned traits of hard work, determination and nurturing.
Alfhild met and fell in love with a tall, handsome, hard-working man named Thomas Edward (Tom). They married in June of 1941, had their two sons, Glen and Barry, built their cozy home in Minnedosa and lived there until Tom transferred to Winnipeg with CP Rail. Alfie worked at Eaton's in the parcelling department until her retirement. Alfie and Tom made numerous trips to Norway to connect with long lost relatives and after a short while her Norwegian family and roots became a very important part of her life and she learned to speak and write Norwegian fluently.
Mom was a dedicated wife, mother and grandmother who, along with Dad, would babysit the grandchildren at the drop of a hat. Her forte was baking, making delicious pies and bread without effort and meticulously sewing and knitting.
Thank you to all the wonderful people in Mom's life, particularly in the later years, who brought her joy and happiness, showed kindness and consideration. Also, thank you to everyone in Kinplace Independent Living and Springfield Place in OakBank and the Lac du Bonnet Nursing Home for all the wonderful care and friendship you showed.
A celebration of Alfhild's wonderful life will be held on Tuesday, September 24, 2019 at 1:00 p.m. at Seasons Funeral Chapel, 576 Balsam Crescent in OakBank. A private family interment will take place at Glen Eden Cemetery.