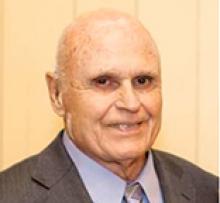 It is with great sadness that we announce the passing of Fernand Champagne, at the age of 91, on September 17, 2019.
Predeceased by his parents, Adelard and Josephine (nee Blanchette); son Richard; sisters, Juliette Leclerc, and Aurore (Cady) Landry; brothers-in-law, Louis Leclerc, Raymond Landry, and John Jones; nephew Robert Landry, and niece Particia Bouchard.
Fern is survived by is his wife Doreen; his daughters, Diane (Roland) Charriere, Paulette (Murray) Klassen, and Renee (Bob) Dewar; grandchildren, Carrie Berlan, Lise Charriere (Robert Hansson), Joel (Erin) Boissonneault, Kyla (Chris) Perreault, and Brandon Dewar; great-grandchildren, Sydney and Tamara Berlan, Julien, Amelie and Olivia Boissonneault, Zac, Paris, and Oakley Perreault; and niece Claudette Landry.
He will be missed by the Young family, Len (Betty) Gary (Linda), Trudy (Grant) Harrison, Janet Jones, Lorna Young, and their families.
Fern dearly loved his family, he would do anything for them. He loved to tease his girls and grandkids. His greatest joy was to play tricks on them. Fern had a wonderful sense of humour and a quick wit.
With his strong faith in God, and Doreen by his side, Fern continued to enjoy his life. He loved his wife deeply as she continued to provide care and compassion throughout his last years.
Fern excelled in the mechanical trades, validated by the many large projects he supervised over his 40 year career.
Fern held a private pilot's licence. He loved flying. In 1988 he became an advanced ham radio operator, call sign "VE4 IA".This hobby enabled him to have contact with people all over the world and across Canada.
He enjoyed his fifth wheel at Pointe du Bois where he could relax with his wife and his beloved sheltie, Todd. There he could boat and fish on the Winnipeg River to his heart's content. Fern and Doreen travelled in and around Manitoba, most notably Aikens Fly-In Fishing Lodge. Other special travels are Hawaii, Florida, Costa Rica, Key West, Playa del Carmen, British Columbia and best of all the Holy Land.
Sincere appreciation to all the medical professionals who have cared for Fern over the years and our grateful thanks for the Health Care System of Manitoba especially the Interim Ward 2nd floor at the Miscercordia Health Centre.
Cremation has taken place. As per Fernand's wishes there will be no formal service.