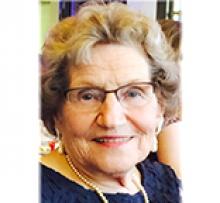 Rosie Lena Zubacz (nee Zarowny) peacefully reposed in the Lord at St. Paul's Hospital in Saskatoon on Tuesday, September 17, 2019, at the age of 84 years.
She was born at Union Hospital in Hafford, SK to John and Katherine Zarowny (nee Sapieha) on May 10, 1935.
She was predeceased by her husband Joseph in 2010; brothers, Peter, Joseph (infant), Walter (Julia), Michael (Katie), Anthony (Sherri-lyn), Edward (Josie); sisters, Helen (infant), Annie (Stan), Jean (Alfie), Minnie (Walter), Nellie (Harold) and Joyce (Walter).
She is survived by her daughter Donna Goodridge (Jim) of Saskatoon; and son Rev. Dr. Gregory Zubacz (Melita); grandchildren, Sofia, Helena and Teresa (Clovis, California); sisters, Stella (Archie), Lorae (Bevan), Lucille (Alex); and brothers, Ralph (Betty) and Albin (Audrey).
Rose grew up at the Zarowny homestead near Hafford where she completed her education prior to moving to Winnipeg. Her first job was as a mail order clerk at the T. Eaton Company. Later, she worked at the Health Sciences Centre in Winnipeg where she served as a nurse's aide until her retirement.
She met the love of her life, Joseph Zubacz, at one of the Ukrainian National Federation dances in the 1950s and they were married May 25, 1957, at the original St. Michael's Ukrainian Catholic Church on Wabasha Avenue in Transcona. Together they had a number of homes in some of the most beautiful regions of Western Canada, including Vancouver, Jasper and Calgary, until finally settling back in Transcona in their home on Melrose Avenue to raise their family in the early 1960s.
A strong woman who survived several serious bouts of cancer, she selflessly gave of herself to her family and the Ukrainian Catholic Church community, especially the Women's League at St. Michael's Parish, always making sure everyone was well-fed. She took pride in her Ukrainian ethnic fare, especially at Christmas and Easter. She tirelessly helped look after her husband, children and grandchildren and made sure her family was always well taken-care of. She was a woman of deep faith who kept her loved ones close in prayer.
In her earlier years, she loved to crochet mittens, afghans and tablecloths, tending her vegetable and flower gardens, and later being with her grandchildren. She remained cheerful to the end in spite of her declining health and loved listening to her grandchildren play piano for her in the care home and hospital.
The family wishes to thank the many health care professionals who provided exemplary and compassionate care to our mother over the last few years. In particular, we are grateful to the physicians and staff of the emergency departments, the medical units at St. Paul's Hospital, the Cardiology Unit at Royal University Hospital and the Respirology and Palliative Care Services. We also extend thanks to the staff of Trinity Manor and Cedar Gardens Care Home.
Funeral services will be held at St. George's Ukrainian Catholic Cathedral, 214 Ave. M. S., Saskatoon, on Monday, September 23, at 10:00 a.m. Funeral services in Winnipeg will be held at 10:00 am on Tuesday, September 24 at St. Michael's Ukrainian Catholic Church, 400 Day Street in Transcona with Metropolitan Emeritus Stefan Soroka and other clergy of the archeparchy officiating, followed by interment at the Transcona Cemetery, 5014 Dugald Road.
Flowers gratefully declined. Donations to the Close to Home Campaign for Hospice and End-of-Life Care of St. Paul's Hospital Foundation, Saskatoon, would be appreciated.