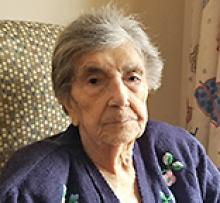 
Peacefully on September 17, 2019, Rosa passed away at the Maples Personal Care Home surrounded by her family.
Rosa was born on May 20, 1924 in Villa Fonche, Portugal. She was the second youngest of four children born to Custodio and Julia. After she married in 1946, Rosa and her husband Antonio were raising their children in the small village of Rio Frio, Portugal. While she stayed home and cared for the children, in order to support his family, Antonio worked in Brazil in the 1950s and France in the 1960s. Her eldest daughter eventually moved to Canada. On December 14, 1972, her husband Antonio passed away. With two young children still at home, Rosa was sponsored into Canada by her eldest daughter Maria. In December of 1973, she made the long journey to Canada, bringing along her two youngest children Rita and Jose. Gloria and her family moved to Canada in 1975. The family was now all living in Winnipeg. Once Rosa settled in and having two children to care for she found employment. Even though she did not speak English, she found a job working at a meat processing factory. She worked very hard and remained at this job for 17 years until she retired at 65. With her children all grown, Rosa lived independently on her own for numerous years. Due to health issues, she eventually moved in with her daughter Gloria and son-in-law Alfredo. He was able to provide her healthy meals, take her to doctor's appointments, communicate and translate from English to Portuguese when necessary and most importantly ensured that she was well cared for. Eventually it became too difficult to care for at home due to dementia and was necessary to move Rosa into River East Personal Care Home and then to Maples Personal Care Home. Here she could receive the additional care she would now require.
Rosa leaves to mourn her passing her daughters, Maria (Custodio), Gloria (Alfredo), Rita (Fernando) and her son Jose (Barbara). She had nine grandchildren, Antonio, Salvador, Michael, Victor, Albert, Anthony, Mike, Elizabet and Marissa. She also had 18 great-grandchildren. She is also survived by her sister Gloria in Portugal. Rosa was predeceased by her husband Antonio, her sister Maria and brother Manuel. The family would like to thank the River East Personal Care Home and the Maples Personal Care Home for their kindness, compassion and support in caring for our mom during this difficult time.
Prayers will be said on Tuesday, September 24 at 7:00 p.m. at Cropo Funeral Chapel, 1442 Main Street. Mass of Christian Burial will be celebrated on Wednesday, September 25 at 10:00 a.m. at Immaculate Conception Church, 181 Austin Street N. Interment will follow.
In lieu of flowers, the family would appreciate that a donation be made to the Dementia / Alzheimer Society of Manitoba or to a charity of your choice.