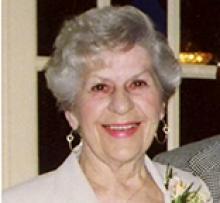 
On September 15, 2019, Edna passed away peacefully at Seven Oaks Hospital, at the age of 83.
Edna is survived by son Ken; and grandchildren, Mathew and Ashley; as well as brother Joe.
She was predeceased by husband William (Bill); and parents, Adam and Lilian Yablecki; and brother Ed.
Edna was born in Winnipeg on January 27, 1936. She married Bill in 1959 and celebrated 52 years of marriage until he passed away in 2012. Together they enjoyed travelling and hosting parties for family and the many friends who were very important in her life.
Edna worked numerous jobs including the taxation centre and joined Bill to help him run the Dairy Queen restaurants for many years.
She was an avid accomplished bowler at Mosienko and Northgate lanes and also enjoyed playing cards with friends or an evening out at the casino.
Countless hours were also spent watching her son and grandchildren play sports and she especially never liked to miss a hockey game.
A funeral service will be held on Tuesday, September 24 at 1:00 p.m. at Cropo Funeral Chapel, 1442 Main Street. Interment to follow in Holy Family Cemetery.
In lieu of flowers, donations may be made in Edna's memory to the CancerCare Manitoba Foundation. Make a donation to