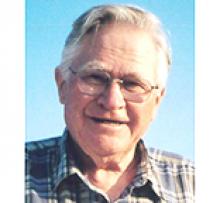 
Edward P. Reimer passed away peacefully, at the Bethesda Regional Health Centre, Steinbach, Manitoba, on Tuesday, September 24, 2019. He was 89 years old.
He is survived by his second wife Martha, stepchildren: Randall (Sieglinde) Hiebert, Dwight Hiebert, Glenn (Shawna) Hiebert and Rhonda (Tony) Wolfe; sister Adeline, nieces, nephews, and his stepgrandchildren.
Edward was predeceased by his first wife Evelina, their stillborn daughter Alana Margaret, his parents, Peter F. and Margaret Reimer, his sisters, Anne, Carol, Esther, and brother Tunney.
Edward was born in Clearspring, Manitoba, on October 26, 1929. He was baptized upon the confession of his faith in Jesus at the age of 14. He and Evelina Reimer were married in 1956. They enjoyed 55 years of married life together until her passing in 2011. In 2012, Edward married Martha (Reimer) Hiebert.
We wish to thank the staff in the Rehab and Emergency departments of the Bethesda Regional Health Centre and the many home care workers who took care of Edward in his final months of life. Your gentle care will always be remembered and appreciated.
The funeral service will be held on Saturday, September 28, 2019, at 2:00 p.m. at Birchwood Funeral Chapel, 162 PTH 52W, Steinbach, MB, with viewing prior to the service. Interment to follow at Memorial Cemetery, Steinbach, MB.