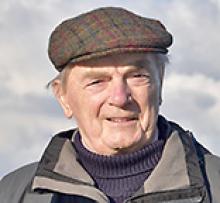 Graham Murray Campbell died on August 15, 2019 in Edinburgh, Scotland.
He was born in Transcona, Manitoba in 1932. He attended Transcona Collegiate Institute until grade 10 and then joined the R.C.A.F. in 1949, where he served as an aircraft mechanic and earned his general equivalency diploma. Afterwards he attended the University of Manitoba where he received the BSc in Electrical Engineering in 1959 and then subsequently the MSc in the same subject. He was a delegate to the founding convention of the New Democratic Party in 1961 and the NDP candidate in the St. Boniface / Transcona constituency in both the 1962 and 1963 Federal elections. Graham subsequently moved to the US where, with a classmate, he established a company that received a contract from NASA to provide launch support for rockets. He subsequently received a PhD in Computer Science from Pennsylvania State University. While at Penn State he co-authored a widely used textbook on computer programming. In 1974 he took up the position as Science Advisor to the Manitoba Government, reporting to Premier Edward Schreyer. Afterwards he resumed his academic career, taking up faculty positions first at Northern Illinois University (NIU) and then the Illinois Institute of Technology (IIT). His research focused first on computer graphics and image compression and later on communications technology. He retired in 2001. In 2015, he moved to Edinburgh, Scotland, where he continued efforts to commercialize the technology that he and his students had developed.
Graham was predeceased by his beloved wife, Helen, who passed in 2004. His sister, Arlyn, died in 1979. He is survived by his son Cameron, a professor, and daughter Kellas, an artist. He also leaves behind his sister, Gerry.
A remembrance event will be held in Winnipeg on May 30, 2020. Details to come.