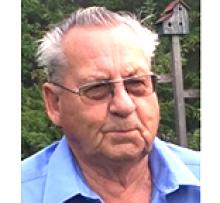 It is with great sadness that we announce the passing of our dad, Elton Wilkinson on September 21, 2019, after a short but hard fought battle with cancer. He passed away, with his family by his side, at the Selkirk Hospital.
Elton will lovingly be remembered by his wife of 54 years, Joan (Braun); his children, Michelle (Jeff) Kulchycki, Doug (Jill) and Kim (Wayne) Lusty; his grandchildren, Eric, Brad, Ryan (Kyrsten), David and Amber; his great-grandchildren, who he calls the 'little people', his brothers, Vernon (Carol) and Glenn (Betty), along with extended family.
He was predeceased by his parents, Harry and Lily.
Elton was born on December 30, 1931 in Ridgeville, MB. He attended Overstone school until grade 8 then worked around home in Ridgeville on the family farm and for neighbours doing odd jobs. He farmed for many years until he bought his first truck from his cousin Willis and started working in the gravel business. After buying his second truck he moved to Winnipeg. Elton hauled gravel in Winnipeg for many years out of the gravel pits in Birds Hill and Springfield area. In 1965 he married Joan Braun. Together they raised their family and continued to build the trucking business. In 1978 the family and the business moved to The Pas where there was plenty of work hauling gravel and logs. Dad later branched out into selling topsoil. Elton's son Doug and his wife Jill now run the family business. He was always so proud that legacy of his hard work was living on. Dad worked hard all of his life and was still helping Doug every minute he could, even up until two months ago when he fell ill. He loved sharing stories with the family, especially the grandchildren.
In the winter Dad and Mom enjoyed spending their winters in Arizona in the warmth and sunshine. They have enjoyed the last 29 years in Yuma where they met up with friends and met many new friends.
We all miss you so much.
The family would like to express a special thank you to all the caring, compassionate staff at the St. Anthony's Hospital in The Pas and the Selkirk hospital.
A Celebration of Life will be held on Saturday, October 5, 2019 at 11:00 a..m at Seasons Funeral Chapel, 576 Balsam Crescent in OakBank.
In lieu of flowers, donations may be made to CancerCare Manitoba.