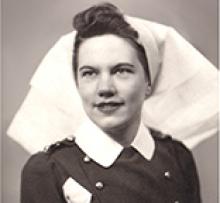 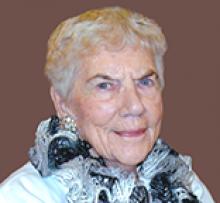 After a rich and storied life, Thyra Read passed away on September 18, 2019, in her 101st year, at the Deer Lodge Centre in Winnipeg. She was born in Melfort, SK and raised in Nipawin, SK.
Predeceased by her parents, Charles W. S. and Louisa Bell; her older sister Joyce; and younger brother Charlie.
Thyra graduated from the Winnipeg General School of Nursing in 1943 and served overseas in the Second World War as a commissioned Lieutenant Nursing Sister in 1944 - 1945.
In 1947, Thyra married her soulmate James Oliver Dutton and together they had three sons. Thyra and J.O. resided in Saskatchewan until 1972 when they moved to Winnipeg. They had a vibrant and loving life until J.O.'s death in 1982.
In 1985, Thyra married Charles Alfred Read of Winnipeg where they enjoyed many happy years together until Charlie's passing in 2003.
In addition to her nursing career, Thyra also volunteered her time in numerous ways including positions with the V.O.N., Winnipeg Symphony, McKinnon Guild of the Children's Hospital, and the Nursing Sisters Association of Winnipeg.
Thyra loved life and took a great interest in the lives of all her family. She enjoyed reading, cooking, entertaining, completing crossword puzzles, world travel and cottage life. In her younger years she was an avid swimmer and singer.
Thyra was awarded both of the Queen's commemorative medals in recognition of her significant achievements in the distinguished service to her fellow citizens, her community and to Canada.
In 2007, she was chosen to be a member of the Canadian delegation representing the veterans of Canada at the rededication of the Vimy Ridge Monument in France.
Mom-Thyra-Tubby (as she was affectionately known by many), will be sadly missed and lovingly remembered by her three sons, Tom (Lynne), Brent (JoAnne) and Jim (Starlit); 10 grandchildren; and 26 great-grandchildren.
Her family extends sincere appreciation to the staff of Tower 6 at Deer Lodge Centre for their dedicated and compassionate care.
In lieu of flowers, donations can be made to the Deer Lodge Foundation or to a charity of your choice.
A celebration of Thyra's life will be held on Friday, November 1, 2019 at 10:00 a.m. in the chapel of Deer Lodge Centre, 2109 Portage Avenue.