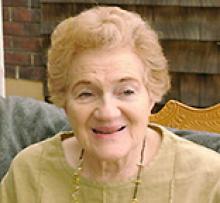 Ruth Bellan, beloved mother, grandmother and great-grandmother passed away peacefully on September 20, 2019 in Toronto.
She will be lovingly remembered by her children, Paul (Josette), Susan (John), and Lorne (Bonnie); and her grandchildren, Leon, Steven, Adam, Melissa, Monica, Daniel, Gary, and Jonathan; and great-grandchildren, Maya, Emma, Adele, Naomi, and Farah.
She was predeceased by her dear husband, Ruben, of 58 years; her older sister Goldie, her younger brother Barry, and her grandson Norbert.
Ruth was born to Lois and Minnie Lercher on October 17, 1921 in Winnipeg and grew up in Melville, Saskatchewan. She attended the University of Manitoba obtaining her B.A. in 1941. In 1943 Ruth moved to Washington, D.C. to work for the British Admiralty. She was transferred to New York where her job was to make shore arrangements for sailors serving on convoys. While there Ruth attended night classes and obtained her M.A. in psychology from Teachers College, Columbia.
After returning to Winnipeg and getting married in 1947 to Ruben, Ruth started a long career teaching children and adults who had reading difficulties. She developed and pioneered her own system for overcoming dyslexia and in 1995 wrote and self published a book "Teach Your Child to Read in 24 Lessons". Ruth continued to practice into her 90s. She was active in many organizations including Hadassah WIZO and Shaarey Zedek Sisterhood.
Ruth travelled extensively with Ruben living for a year in Manchester in 1964 and then London, England in 1974. In her late 80s after Ruben had passed away, she travelled to China and at age 86 went to India for six weeks.
Ruth was sensitive to people in difficulty and came up with practical ways to help them. She paid attention to everyone she came across and people felt she really cared about them. She was very hospitable and hosted family, friends and even many strangers into her home. She was a lover of the arts: she had season tickets to the theatre, ballet and symphony, and was a generous donor. She also volunteered at the Fringe Festival. Ruth stayed up to date with the latest trends in music, computers, and the arts. This portrait would not be complete without mentioning her love of ice cream and chocolate.
A graveside service was held in Ruth's memory on September 23, 2019 at the Shaarey Zedek Cemetery in Winnipeg. The family would like to thank Rabbi Mass and the many friends who expressed condolences. Family and friends will always cherish her memory and she will be dearly missed.
If desired, donations in Ruth's memory could be made to the Ruth and Ruben Bellan Fund at the Jewish Foundation of Manitoba.