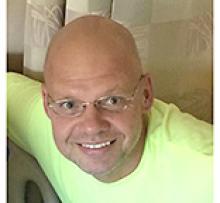 
It is with deep sadness that we announce the sudden passing of Michael Lehner at the age of 50.
Michael grew up in Winnipeg, Manitoba and graduated with a Commerce degree from the University of Manitoba. After graduation he went on to work at his family's business before eventually branching off on his own.
Michael's life was spent in a constant state of curiosity. Starting from a young age he had a keen interest to learn and try new things. From travelling and studying languages, to starting small businesses, and even starting his own TV show 'Turn' at VPW when he was a teenager. This spirit continued into adulthood and he continued picking up new interests and hobbies. When talking with Michael there wasn't a subject anyone could bring up that he wouldn't know something about. He was an avid reader and very knowledgeable.
Michael was a naturally charismatic person and people were always drawn to him. He was a great listener and enjoyed hearing people's stories and relating his life to theirs. He was friendly, had a warm smile, and was easy to laugh. He was always willing to help anyone in need and in the last few years he spent much of his free time volunteering at various organizations including Winnipeg Harvest, Agape Table and the Bear Clan patrol.
He will be deeply missed by his family, his many friends and his extended family of rescue dogs that he fostered and adopted.
A service will be held at a later date.
In lieu of flowers, donations can be made to the Winnipeg Humane Society, 204-982-2041, email: donations@winnipeghumanesociety.ca