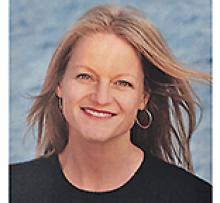 It is with great sadness that we announce the death of Julia Catherine Billingsley (nee van der Zweep). She died on August 8, 2019 in Rye, New York, from glioblastoma, an aggressive form of brain cancer that she was diagnosed with in October of 2018. She was 52 years old. The cancer was relentless, but Julia never lost her endearing sense of humour through a valiant fight. She was surrounded by family and friends when she passed.
Julia was born in Winnipeg, Manitoba on March 8, 1967, the daughter of Teke and Jesse van der Zweep, who had immigrated to Canada from Friesland after the Second World War. Julia, her sister Felicia and brothers, Perry, Nick and John grew up on a mixed grain farm in Balmoral, Manitoba - a heritage of which Julia was very proud. Her parents passed away several years ago.
Julia received degrees in nursing and intensive care nursing from St. Boniface Hospital and the University of Manitoba, both in Winnipeg. In October of 1989, Mrs. Billingsley was chosen to be Miss Blue Bomber and represented the Winnipeg Blue Bomber football team at games and civic events throughout the 1989 / 1990 season.
Seeking adventure and, in her words, "someplace warmer than Winnipeg", Julia moved to Riyadh, Saudi Arabia in 1992. She first worked as a charge nurse in intensive care at King Faisal Hospital and Research Center. The Riyadh expatriate community was drawn from throughout the world, and Ms. Billingsley met her future husband, James R. Billingsley, Jr., in early 1993. The two were inseparable ever since.
While living in Saudi Arabia, Julia and Jim went on scuba diving adventures up and down the Red Sea coast, exploring dive sites and wrecks that few people have seen. They became uncomfortable in Riyadh as anti-Western sentiment grew following the Gulf war, which ultimately resulted in terrorism that came dangerously close to the couple. They departed in 1997 and took a three-month scuba diving expedition that brought them to Hong Kong the day after the UK hand over, an island off the coast of Malaysian Borneo, Bali and Lombok in Indonesia and the Coral Sea off Australia, to name a few. After they were married in 1999, they honeymooned scuba diving in Palau and Yap. Jim and Julia logged over 300 dives together.
The couple returned to New York City in late 1997 and Julia became a nurse manager for the post-surgery recovery room at the Hospital for Special Surgery in New York. In 2000 Jim's work took him to Connecticut and Julia became a charge nurse in the intensive care unit at UCONN Medical Center in Farmington. She continued working after the birth of their daughter Charlotte in 2002, but stopped working after the birth of their twins, Campbell and Latham, in 2005. Three kids under three was enough. In late 2004, Julia and Jim moved to Rye where the Billingsley family had resided since 1964.
Julia was very active in the Rye community. Immediately before she was stricken with GBM, Julia was serving on the Board of Directors of Rye YMCA, as a Governor of Manursing Island Club and Chairman of that Club's Membership Committee and as a Deacon of Rye Presbyterian Church.
In 2014 Julia returned to work as a nurse for the Rye City School District and in 2016 she became a nurse for Rye Country Day School, where she worked until her diagnosis. As a nurse, Julia touched, and meaningfully contributed to, many lives. Her calm, patient, caring and common-sense demeanour made her particularly effective in her profession.
Julia lived a life devoted to her husband, children and extended family. The role she took most pride in was being a mother to her three children, Charlotte, Campbell and Latham. To her friends, relatives and those she cared for, she was a wellspring of boundless joy, vivacity, humour, affection, thoughtfulness, unselfish caring and courage. Julia was always wholly present for others, able to discern their needs at a deeper level and to respond with wisdom, compassion, tears or laughter. Julia's friends were selflessly by her side throughout her difficult battle with GBM and her family is extremely grateful for their generosity and love.
A memorial service celebrating Julia will be held at Rye Presbyterian Church on September 7 at 10:00 a.m.
Her family have asked that friends consider a contribution to Soul Ryeders (www.soulryeders.org) in her honour.