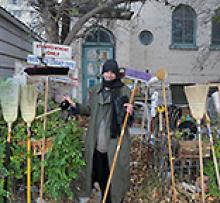 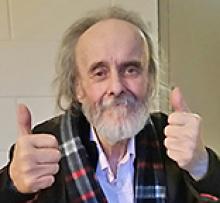 It is with deepest sorrow and heavy heart that I announce the sudden passing of Alexander Nicholas Syzek. He passed away peacefully in his sleep at the Middlechurch Nursing Home where he resided for the past three years.
Alexander is survived by his brother Nicholas (Kathy); and five nephews and nieces, Nicholas in BC, Jacqueline ( Richard), Daniel (Haley), Caroline (Daniel), and David; and four great-nephews and great-nieces, Olivia, Isaac, Estelle and Harrison.
Alexander was born to parents, Nicholas and Mary. who started Winnipeg Modern Brush Co. Our father became ill and died early in our lives. Our mother continued to operate the business with the help of both brothers. Alexander worked at the T. Eaton Company and Assiniboia Downs race track for many years while selling brushes and brooms with our mother at 422 Notre Dame Avenue.
He was an alter boy for years at St. Marys Church and attended elementary school graduating to St. Paul's College High School. After graduating he attended the University of Manitoba and obtained an arts degree with honours. He was always an A student. He then entered law school where he spent two years . Alexander became ill and did not graduate. He had a mental breakdown which was the start of schizophrenia and a change in family life.
For 40 plus years he and the family dealt with the highs and lows of his illness. Alexander could always be seen with our mother selling brushes at the business. He would carry brooms with him on the bus and everywhere he went. He usually sold all of them if you were lucky enough to meet him and buy one. Although he was ill, Alex was a kind and very gentle soul. If you met Alexander at 422 Notre Dame Avenue or on the bus, or downtown, he would wish you a good day or tell you "you look beautiful" with a "God bless you" to end the conversation.
He would then give you some business brush advertising or a five year calender along with a handful of Domo gas coupons, or even a broom or mop which he propped up on the front fence. He stood outside 365 days of the year whether it was +30C or -30C. He never missed a day for years. He could always be seen with our mother. They were inseparable. He was always happy.
He never complained even when he was hurting, which made it difficult to know and understand how he really felt. Alexander was independent in all aspects of his life.
I miss you my brother.
Cremation has already taken place and a Celebration of Life will be held at a later date as well as interment into the Holy Ghost Cemetery. He will be put to rest with our mother.
I would like to thank the doctors and staff of the Mental Health Unit of the Health Sciences Centre for the years of care and help my brother received. I would also like to thank the staff at the Middlechurch Nursing Home for the care and compassion they gave to Alexander allowing him to be who he was which was not always easy.
Memorial donations may be made to the charity of your choice.